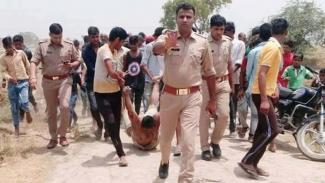 A spate of lynchings of Muslim men by communal mobs has again taken place in Jharkhand and Uttar Pradesh.

45-year-old cattle trader, Qasim, was lynched to death and the 65-year-old farmer Samiuddin was brutally beaten by a mob of mostly teenagers and minors in Hapur, Uttar Pradesh. A video shows that Qasim died begging for water, as the mob instead continued to shower jeers and abuses on him. The image that has come to represent the Modi-Yogi rule is that of the mob dragging Qasim’s dead or dying body along the ground like the carcass of a dead animal, escorted casually by policemen in uniform, one of whom is looking at his phone, and another trying to stop someone from taking a photograph. The casual communal cruelty that Yogi and Modi have normalized is captured in this horrific scene.

In another horrific incident from UP, Salim Qureshi alias Munna was picked up by two police constables in Bareilly on June 14 from his home and taken to a private wedding hall where they beat him up severely. He died of his injuries at the All India Institute of Medical Sciences (AIIMS) on June 21, 2018. This was nothing but a custodial communal lynching by Yogi’s police.

A new video shows Samiuddin also being beaten and abused. Samiuddin was later taken to a temple and again beaten there. Like at Dadri, this lynching was also planned and instigated from a temple.

Meanwhile in Jharkhand, Sirajuddin Ansari and Murtaza Ansari were lynched to death by a mob at Godda, which claimed the two men were part of a gang that had stolen buffaloes; then Tauhid Ansari was beaten to death on suspicion of carrying beef in Ramgarh. The police is of course blaming the victims and accusing them of being cow-smugglers.

The Godda BJP MP Nishikant Dubey made it clear that in his eyes the Gau-Goons are heroes, and he announced that he would bear the legal expenses of the four accused in the Godda lynching case. Modi, who had made a distinction between genuine cow-protectors and fake “anti-social” ones has of course not said a word about which category Dubey fits.

In Delhi, a united Citizens’ Vigil was held on June 22 evening at Parliament Street, in which students’ groups, women’s groups, trade unions and left parties together protested against the attempts to turn India into Lynchistan. 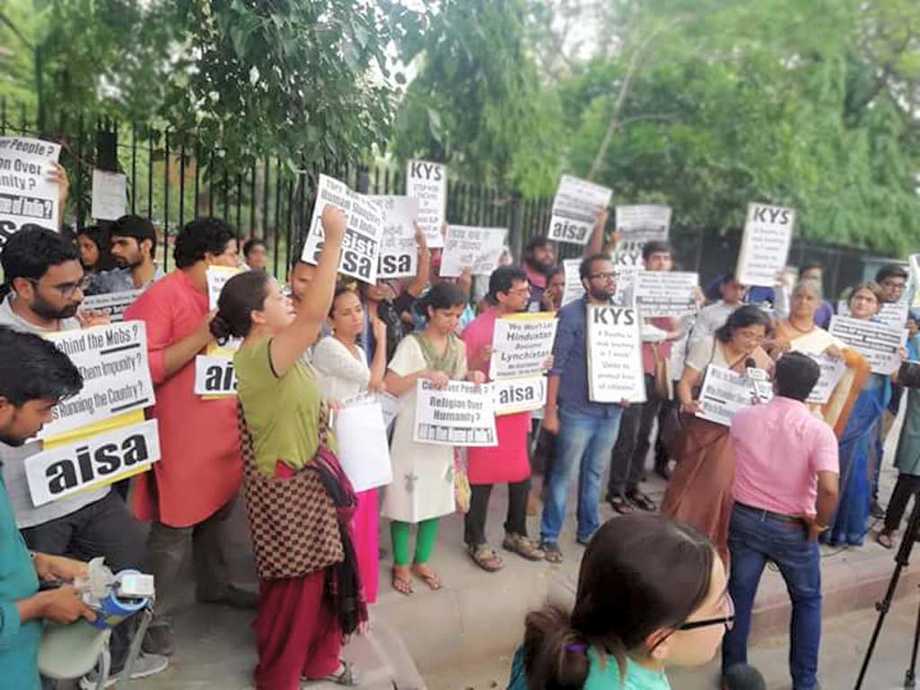