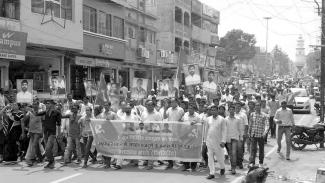 On June 10, the CPI(ML) held a protest demonstration outside the Ministry of External Affairs office in Delhi asking what measures had been initiated for the safe return of 7 workers, from Jharkhand, Bihar and Kerala, employed by the KEC Company who had been abducted on 6 May in Afghanistan. The protesters were joined by family members of the abducted workers.

Vinod Singh, Central Committee member of the CPI (ML), and former MLA of Bagodar, Jharkhand from where 3 of the abducted workers hail, addressed the protesters saying, “We have been demanding measures to ensure the safe return of the workers for the past one month, I myself have met the CM of Jharkhand, and have written several times to the Ministry but so far we have been greeted with silence. It is well known that unemployment is at an all-time low in the country and people are forced to migrate to other countries for work. The Indian Government must take the responsibility and ensure the safe return of the workers. It is a real test for Modi Government's diplomacy.”

Comrade Vinod, who has led many efforts by the CPIML in the past to protect the rights and safe return of migrant workers from Jharkhand who find themselves stranded, arrested or otherwise in trouble in other countries, also said that there is an urgent need to formulate a policy which will bind the Government of India to specific measures to protect migrant workers from India.

Hemlal Mahto, who came from Jharkhand and is a relative of one of the abducted workers said, “The family members of the missing workers were informed by the co-workers who are working along with them in Afghanistan. They informed their families and it has been over a month that we are meeting all concerned authorities but nobody is willing to take any action. The company – the employers - did not inform the families of the abducted workers.”

Kawalpreet Kaur from AISA said that “Earlier External Minister Sushma Swaraj lied to the nation about the 39 missing Indians in Iraq who were later found to have been killed, and now the MEA haven't taken any initiative for the safe return of workers abducted in Afghanistan. This exposes the farce of the Government's diplomatic efforts to ensure safe return of its citizens.”

Neeraj Kumar, Delhi AISA Secretary said that “It is only after agitation and protests that Government has agreed to meet the family. We have been informed by Deepak Mittal, Joint secretary of the MEA that Sushma Swaraj will meet the family members of the abducted workers on 9th of June with a delegation. We hope that swift action will be taken otherwise will we intensify the protests.”

Sushma Swaraj, the Minister for External Affairs, eventually met the family members of all seven abducted workers on 15 June. But she gave no details on what efforts her Ministry was making to secure the safe return of the workers. Her reassurances combined with warnings that public protests might jeopardise the diplomatic efforts at rescue were not very convincing given her record of outright public lies in the case of the missing Indians in Iraq.

Comrade Pawan Kumar Mahto, president of Migrant Labourers’ Association, told Liberation that Jharkhand’s workers, forced to migrate to earn a living, are extremely vulnerable in foreign lands, and receive no safety and support from either the Indian Government or the companies that employ them. “We keep receiving complaints of migrant workers being held hostage by employers, losing their life due to workplace injuries, and so on. Their passports are routinely confiscated by the companies, which effectively turns them into bonded labour,” he says.

Comrade Pawan adds that if a migrant worker dies in a workplace accident in some other state or country, the company does nothing more than send the body back home! Some years back, 11 workers in Malaysia had their passports confiscated and were being held captive. When they somehow escaped captivity, they were jailed because the company cooked up some charges against them. It was the efforts of the CPI(ML) that led to their safe return two months later.

He also told us how, on another occasion, 13 workers were similarly held captive in Malaysia. On that occasion too it was CPI(ML) which approached the Embassy and secure the safe return of the workers. He says there was a time some years back when a sudden Ebola epidemic claimed the lives of scores of Indian workers in the Democratic Republic of Congo. The company just returned the 15 dead workers’ bodies home without paying any compensation. CPI(ML) organised the gherao of one company official who came to deliver the body of one of the workers; only then did the company agree to pay the workers’ families Rs 5.5 lakhs each in compensation. The party also secured the return of 150 workers from the Congo, on that occasion.

Nearly every month, one or two dead bodies of workers are sent home from the Gulf countries, whether due to accidents or illnesses. The companies should not be able to deny responsibility either for accidents or for illnesses: workers are vulnerable to illnesses precisely because of the insanitary conditions in which they are forced to live and work.

In July 2016, a Jharkhand-based journalist wrote a piece ‘Why Indian workers abroad are indebted to a former Jharkhand MLA’ for Daily O. He wrote about how 43 workers from Jharkhand “coughed up around Rs 50,000 each to work abroad. Before taking a flight, all were declared medically fit in India. But after three months of employment, they were told by their respective companies that they were unfit. The companies neither wanted to give them salary nor send them back to India. It was only after contacting Vinod Kumar Singh, a former MLA, that the 43 labourers could return home.”

The article observed, “Vinod Singh, a leader from Jharkand’s Bagodar constituency, has since 2009 helped hundreds of labourers come home from exploitative jobs not only in Malaysia, Kuwait and the Democratic Republic of the Congo but different states of India as well. Singh's tireless efforts, sometimes single-handedly, have saved more than 500 labourers from being stuck abroad. The article speaks about the Migrant Workers’ Association created on the CPI(ML)’s initiative.

The article noted that the reason why Comrade Vinod is “easily approachable, even from abroad is that he has always kept the same phone number, which is known to everyone in his constituency and remains available on it round the clock. So even when the companies took away every document from the migrated labourers' possession, Singh's number remained handy in their mind.”