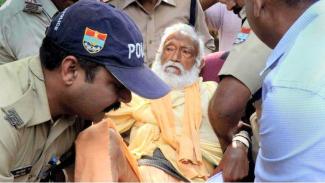 ON 11 October, environmentalist G.D. Agarwal passed away. It was the 111th day of his indefinite fast to ensure that the river Ganga gets to flow ‘aviral’ (unfettered) and clean. In the past few months, Agarwal had written three letters to Prime Minister Modi, highlighting carefully articulated and specific demands to tackle the ecological crisis facing the beleaguered Ganga. Some of these demands have been raised by several environmental organizations and people’s movements in Uttarakhand. Agarwal wanted the Modi government to cancel all proposed or under construction hydel power projects on various tributaries of the Ganga including on Alakananda, Dhauliganga, Nandakini, Pindarganga and Mandakini. In addition, he wanted a complete stop to all types of mining activities on the Ganga riverbed. In raising these demands, Agarwal was taking on powerful businesses and corporations with huge commercial interests in real estate, mining and construction. And as yet another Swami before him came to realize, the RSS-BJP and the Modi government was least interested in addressing these concerns. In 2011, Swami Nigamananda died after a prolonged hunger strike in Dehradun demanding an end to illegal sand mining and quarrying on the banks of the Ganga. Several RSS activists were known to be actively involved in the local quarrying business, and the BJP-led Uttarakhand government was hardly keen to put a halt to their profiteering.

Agarwal’s final letter to Modi, penned on 23 June this year is particularly scathing, revealing as it does deep anger and disappointment. He states unambiguously that the Modi government has not undertaken a “single action” to alleviate the Ganga crisis. The government has instead chosen to serve the “Corporate Sector and several business houses”, he adds. He also mentions that following his previous fasts during the UPA era, the then government had agreed to scrap a number of hydropower projects along Bhagirathi river and also declared about 135 km of the riverfront from Gaumukh to Uttarkashi as an eco-sensitive zone. His message is clear. Previous governments had been forced to listen to him, while this one stubbornly chose to pay no heed whatsoever despite its shrill invocations of devotion to the river Ganga. None of Agarwal’s letters evoked a response from Modi. BJP leader Uma Bharati did visit him, though she refused to make any concrete commitments to any of his demands. Agarwal’s tragic death is a terrible and sombre symbol of the farce of Narendra Modi and RSS-BJP’s ‘environmentalism’ and much-touted concern for ‘Ma Gange’. In so many ways, Agarwal’s demise brings to the fore the core elements of governance in the Modi era: loud advertisements of “concern” for genuine issues, unabashed creation of a communal rhetoric woven around these concerns, and a complete refusal to actually deal with them.

During the 2014 Lok Sabha campaign, Modi declared himself to be an obedient son of Ganga, a son ‘destined’ to clean and purify her. In one of his first public appearances after BJP’s subsequent landslide victory, Modi performed a Ganga aarti in Banaras. He renamed the Union Water Resources Ministry as the “Ministry for Water Resources, River Development and Ganga Rejuvenation”. For environmentalists, this selective treatment meted out to one river out of all the stressed water bodies in the country came as no surprise. ‘Protecting’ the Ganga, after all, has been a cornerstone of the Sangh Parivar’s communal campaign for quite some time now. Visualised as being central to Hindu identity, this river became a formidable cultural resource in the RSS’ many campaigns. Let us not forget the explicit connection VHP’s Ashok Singhal drew while addressing an anti-Tehri protest in the late 1990s: “I am here not to talk about the seismicity of the dam, or the cost-benefit of the project. I am talking about Gangatva. Gangatva is Hindutva. Hindutva is Rashtratva”. For the Sangh Parivar, Ganga was merely a political resource, a cynical means to build support for their toxic and exclusionary agenda of a Hindu Rashtra. The renaming of the Water Resources Ministry and the launching (with characteristic fanfare) of the Namami Gange campaign to clean the Ganga are surely links in this larger political narrative.

So what is Namami Gange all about, apart from political rhetoric? The Modi’s government’s various environmental initiatives are, in reality, Namami (salutations to) Corporates, Namami Mining and Quarrying Lobby! Absolutely no effort has been made to stop the construction of even a single hydel power project, even as such projects are wrecking havoc on the ecology of the Himalayas and destroying the Ganga. Illegal mining and quarrying continues unabated, as BJP governments in the various states and the Centre strive to satisfy their corporate cronies. Meanwhile, Rs. 20,000 crores has been allotted to the Namami Gange project, the bulk of which is being used to sanction sewerage treatment plants. The National Ganga Council (NGC), which is headed by Modi, has never met since it was constituted in October 2016. Finance Minister Arun Jaitely claims that 187 projects have been sanctioned under the Namami Gange programme, out of which 47 projects have been completed while remaining projects are at various stages of execution. The National Mission for Clean Ganga contradicts these tall claims, stating that only 18 projects have been completed out of 95 sanctioned. The Comptroller and Auditor General (CAG) has hauled up the Central Government for shoddy use of funds allotted to this project and for missing several targets and deadlines.

The Modi government’s sheer hypocrisy on the environmental question is out there for all of us to see, in all its crassness and vulgarity. It is high time it is called out loudly and clearly, by people across the country. We cannot sit back and watch our rivers become tools for communal mobilisation and corporate profiteering.