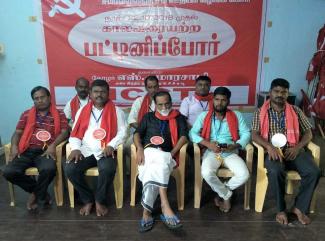 AICCTU President S Kumarasami and 9 leaders of the AICCTU are on an Indefinite Hunger Strike at Coimbatore demanding that the the TN Government frame rules for model standing orders for amendment to Industrial Employment Standing Orders Act which was passed by the TN Assembly unanimously in 2008. These amendments are important with regard to regulating working conditions and percentage composition of non permanent workers in any establishment in the state

Along with Comrade Kumarasami, the hunger strikers include Comrades Balasubramanian, Rajesh, Babu, Duraisami, Gurumurthy, Jayakumar, and Senthilkumar, Sakthivel and Janakiraman.

The Amendment to the IESOA was in response to the widespread condemnation of the Sumangali Scheme where 100% production was done with trainees alone. The amendment provides for inclusion of two items in the schedule of the Act: item 10 A provides for employment and reemployment and conditions of service of categories of workers trainees, badlis, temporary, probationers and casual workers; item 10 B provides for determining the percentage of non-permanent workers vis a vis permanent workers in an establishment.

Presidential assent for the amended Act was delayed saying the amendment would affect investment. AICCTU pointed out that such an amendment is in place in Maharashtra since 1976 and investment was not affected, since it is the No 1 state in industrialisation till date.

Finally in July 2016, the Madras High Court directed the State government to frame rules in Model Standing Orders Act to implement the amendment in three months in July. The Labour Secretary, in a meeting of all Central Trade Unions in October 2016, had agreed to make appropriate recommendations to the Government. But in 2016 November, while filing a status report the same officer stated that there is no need for the amendment as the central government in planning to merge labour laws!

The hunger strike, demanding the same amendments in TN that are in force in Maharashtra, will protect the interests of lakhs of non-permanent workers in the state.