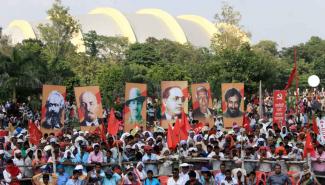 Toll The Knell For Modi Raj

THE resistance to the Indira Emergency in 1975 by the JP movement started from the historic Gandhi Maidan in Patna. A massive rally of the CPI(ML) at the same Gandhi Maidan on 27 September gave the battle cry of “Oust BJP, Save Democracy” against the fascist BJP and its Governments at the Centre and States.

The 10th Party Congress of CPI(ML) had called for the eviction of fas-cism and the building of a people’s India. Carrying this call forward, the Bihar State Committee organised statewide people’s rights campaigns in Bihar under the ‘Oust BJP-Save Bihar’ drive for 3 months from April to June followed by a People’s Rights Mahasammelan and then door-to-door campaigns by thousands of activists to prepare for the rally.

People started arriving for the rally from the evening of the 26th Sep-tember, and by the morning of the 27th the entire Gandhi Maidan was full of red flags. Along with Left parties, the RJD and LJD leaders were also invited to the rally. Gujarat MLA Jignesh Mevani sent a solidarity message for the rally. 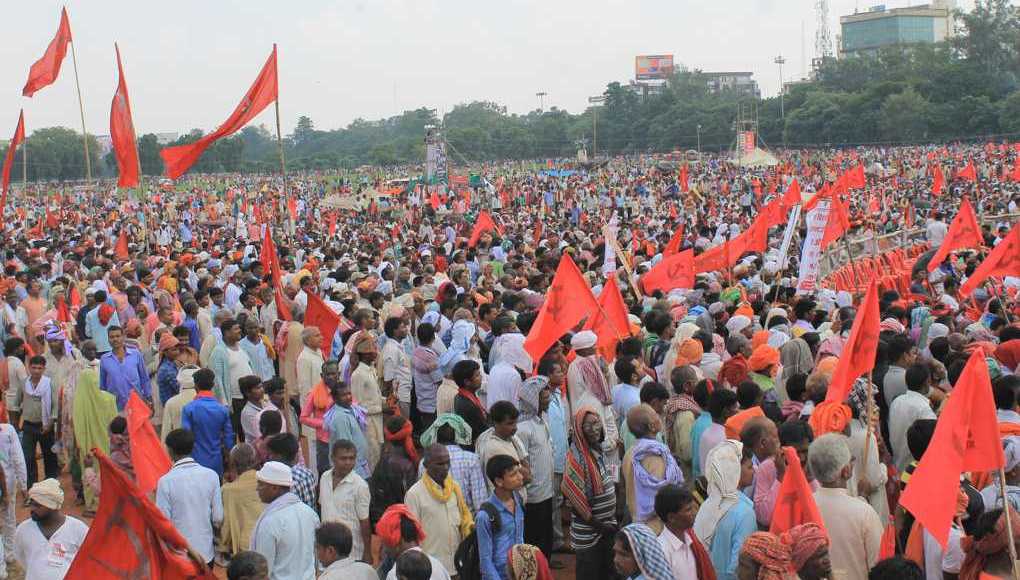 The rally started at 11 am on 27 September after a cultural program. Presided over by Comrade KD Yadav and conducted by Com. Dhirendra Jha, the rally began with tributes to Party leaders who are no more with us, after which Party General Secretary Com. Dipankar Bhattacharya, other leaders, and leaders from Left parties, RJD, and LJD took their places on the dais.

The rally was addressed by several Party leaders as well as other invitees. CPI(ML) Bihar State Secretary Com. Kunal said that Left and socialist forces must come together to counter the current communal-fascist regime where democratic rights of the working class are being snatched away and the weaker sections are being attacked. Central committee member Com. Manoj Manzil said that the Nitish-BJP government in Bihar has thrown the land reforms commission report and recommendations into the dustbin, thrown hundreds of poor into jail in the name of liquor ban, evicted the poor from their lands, and is protecting the perpetrators of violence against women. The goon gangs of the BJP are attempting to spread terror and hatred in Bihar and it is the CPI (ML) which has countered them ceaselessly and given them a befitting reply. JNUSU President Com. N Sai Balaji said that this government is attacking institutions of higher education with fund cuts, seat cuts, increasing instances of sexual violence and shutting down of GSCASH in universities like JNU.

AIPWA State Secretary Com. Shashi Yadav said that Rasoiyas (mid-day meal workers) and other scheme workers are enraged at the treachery of the Modi government and if they are not given a mini-mum monthly wage of Rs 18,000 they will vote out and throw out this government. CC member Com. Salim said that there is an undeclared emergency in the country and lynching of minorities and dalits, kill-ing of intellectuals and thinkers has become the new normal. CPI-M State Secretary Com. Awadhesh Kumar and CPI State Secretary Com. Satyanarayan Singh said that the Modi government is pro-corporate and anti-people, causing distress to farmers, workers, students, youth, women and all weaker sections. We must learn from the Communist parties in Nepal and unite to come together and throw out the government at the Centre as well as the shameless JD(U)-BJP government in Bihar. 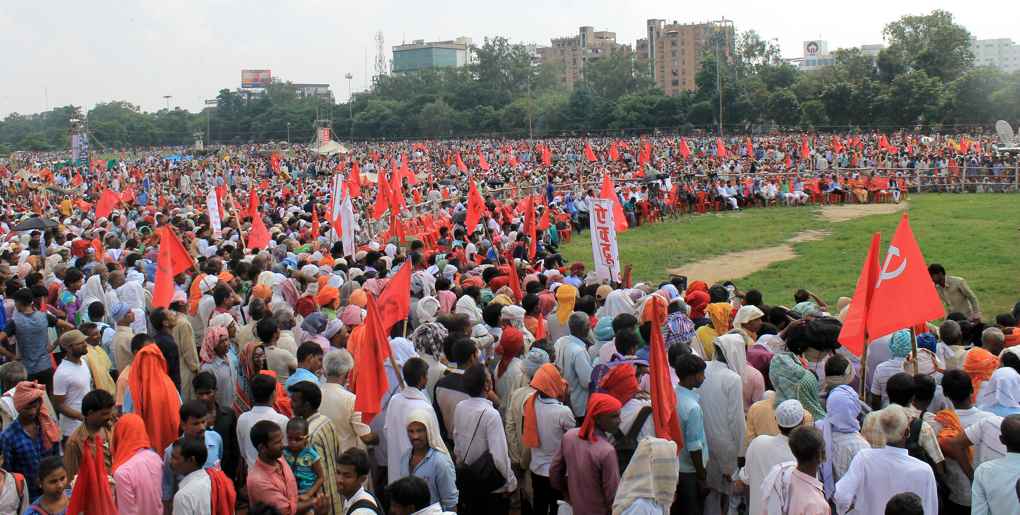 Leader of CPI (ML) in the Assembly MLA Com. Mahboob Alam said that the Modi and Nitish governments have betrayed the people and have caused fear and distress all around. A Bihar Minister is implicated in the Muzaffarpur shelter home sexual violence horror, and yet the Bihar government remained silent until the CPI (ML) raised the issue inside the Assembly with such vigour that they were forced to act. AIPWA National Secretary Com. Kavita Krishnan said that those who raise questions to the government on its anti-people policies, actions and speeches are being branded ‘urban naxal’ and ‘anti-national’ and are being asked to ‘go to Pakistan’; but in these difficult times we must continue to raise our voice and ask questions, as that is the key to saving our democracy and building the India of Bhagat Singh’s dreams.

LJD leader Uday Narayan Chaudhari and RJD leader Shivchandra Ram said that every welfare scheme announced by the Modi govern-ment has turned out to be nothing but a ‘jumla’, and this government is completely mired in crony capitalism and corruption including the huge Rafale scam. They said that this historic rally organised by the CPI (ML) has infused new energy into the fight for social justice.

AIPWA General Secretary Com. Meena Tiwari said that the Nitish government is totally callous towards violence against women; the government was silent on the Muzaffarpur shelter home incident until it was forced to act under pressure from women’s organisations. Kisan Mahasabha General Secretary Com. Rajaram Singh said that the people of the country—farmers, workers, dalits, minorities, women, stu-dents, youth-- are in deep distress due to the government’s failure on all fronts. 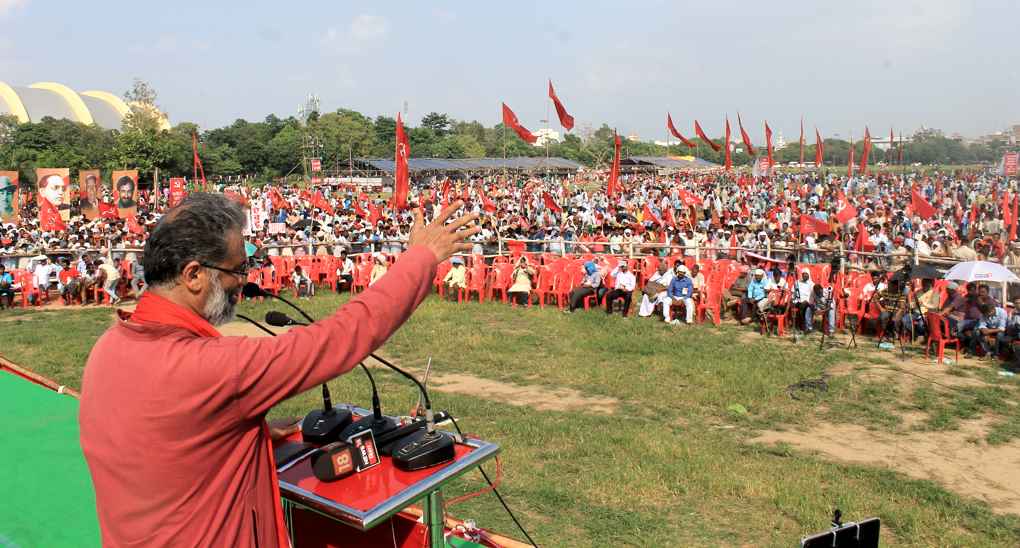 CPI(ML) General Secretary Com. Dipankar Bhattacharya was the final speaker in the rally. He said that through this rally, we have come to bid farewell to Narendra Modi. Petrol-diesel prices are skyrocketing, the rupee is falling, the Rafale scam is unfolding as the biggest ever defence scam, NPA is to the tune of 10 lakh crores, rich capitalists are looting the country and running away abroad, women and children are being raped in shelter homes, temples, and hostels, and lynching has become the new normal. Nitish Kumar has cheated the people of Bihar by bringing the BJP to power through the back door.

He said that the fascist BJP can be fought by the united strength of Communists and Socialists. We must find an answer to the question of how these two can come together in this fight to save democracy. He said that we are in favour of an alliance, but a principled alliance that will respect and draw strength from the dreams and sacrifices of comrades Ramnaresh Ram, Mahendra Singh and Chandu and the struggles of the poor and the working class for rights and dignity.

Comrade Santosh Jha read the political resolution which was applauded and passed by the rally. The resolutions in brief are as follows:

1.    Organised and institutional scams have become the signature characteristic of the government. The rally calls upon the common people to expose and fight against this corruption and sky-rocketing prices.

2.    The rally reaffirms the resolve to protect the Constitution and democracy and oppose the stifling of democratic voices and assassination and arrests of thinkers, intellectuals, writers, lawyers and activists.

3.    The rally resolves to fight against the attempt by Sanghi forces to spread communal poison and divide the country on communal lines.

4.    The rally holds the Chief Minister and Deputy Chief Minister of Bihar accountable for the sexual violence against women including the incidents of violence in Muzaffarpur and other shelter homes, and demands their resignation.

5.    The rally condemns the eviction of the poor from their lands without proper alternative arrangements and demands a stop to this, and proper compensation to the poor for their lands. The rally also demands the release of the lakhs of poor and dalits who have been arrested under the liquor ban Act.

6.    The rally demands complete loan waiver to all farmers including sharecroppers, and an MSP of 1 ½ times crop outlay.

7.    The rally demands guarantee of employment to the country’s youth, and a minimum unemployment allowance of Rs 5,000 per month to unemployed youth till such time as they get employment.

8.    The rally supports the Rasoiya strike scheduled to be held on 5-9 October 2018, and demands dignified wages and work for all scheme workers.

9.    The rally appeals to Communist and Socialist movements to come together against this fascist government and appeals to the people of Bihar and the country to vote against the BJP and teach them a lesson, and thus pave the way for the building of an India of Bhagat Singh’s and Ambedkar’s dreams.