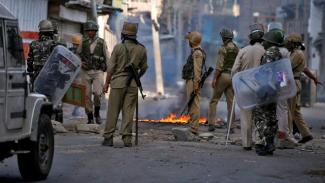 INDIA recently dismissed the UNHCHR report into human rights violations in Kashmir as a fabrication. But recent local body elections in Kashmir as well as a massacre of civilians  have once again exposed the Modi Government’s and BJP’s lies about Kashmir.

BJP claims to have swept local body polls in J&K - but the truth is that the BJP has lost ground in Jammu and Ladakh and its ‘victory’ in the Kashmir Valley is at a time when voting was at all-time low and the two main local parties, NC and PDP, are boycotting the elections in protest against the Modi Government’s stand on Article 35A.

The voter turnout in the the 4% voter turnout – the lowest since 1951 and worse even than the 5.18% turnout in the 1989 elections at the height of the militancy in the Valley. The Modi Government can certainly claim credit for this historic low voting in the Valley. Out of 624 municipal body seats in the Valley, polling took place only in 208 seats, while the rest remained uncontested - with either a lone contestant or no contestant on the seat! 185 wards remained vacant in Kashmir, with no nomination filed.

BJP’s vote share  in the three assembly constituencies of Jammu city (considered a BJP stronghold) – Gandhi Nagar, Jammu (East) and Jammu (West) - fell steeply by 51%. BJP’s vote share has fallen in many other Jam-mu districts too - including Samba, Kathua Udhampur, Doda, Rajouri Kalakote and Reasi. It may be remembered that the BJP, just a few months ago, had attempted communal polarisation in Jammu in the name of de-fending the accused in the Kathua rape-murder. It seems that this polarisa-tion failed to save the BJP in Jammu.

The BJP has also lost Ladakh (where it holds the Parliamentary seat), with Congress winning all 13 wards of the Leh Municipal Committee, and 5 wards in Kargil where Independents won 8.

Meanwhile, Kashmir is under a shutdown called by the Joint Resistance Leadership following a massacre in which seven civilians have been killed and 25 injured, several of them grievously. The civilians were killed when they attempted to douse the fire at a home which had been the site of a gun-fight between militants and security forces. The forces had left the gunfight site before sanitising it of explosives - leading to civilians maimed and killed in explosions. Many of the injured also show bullet and pellet injuries suggesting they were injured in deliberate firing by forces.

The late Shujaat Bukhari (assassinated a few months ago), had observed that “encounter” is a misnomer for such carefully planned operations in Kashmir, which almost inevitably target civilians. Writing about a similar killing of civilians at an “encounter” site, Bukhari had written that the “bloodbath shows how intricately militants and the civilian population are linked…it is a large-scale war in which the civilian population is also pit-ted against the forces.” He had observed that “Almost every operation seems to follow a pattern that has become a ritual, from the search operations and the laying of the security cordons, to the opening of fire and the protests by civilians, to burnt houses and bodies and vast public funerals.”

Bukhari had ended his piece with the words, “Recognising it as a political problem and talking to all stakeholders without conditions is the only way. Pakistan also is important to the process of finding a solution. Killing militants has come at a huge cost. The forces may kill militants but will not kill the ideas behind militancy. The past 27 years have shown that repeatedly.”

But the Modi Government is in no mood to resolve the Kashmir issue - it knows full well that every killing adds fuel to the fire of Kashmiri people’s anger and despair, but is determined to continue and intensify the killings, hoping to fan up hatred against Kashmiris for votes in forthcoming Assembly and Parliamentary elections.