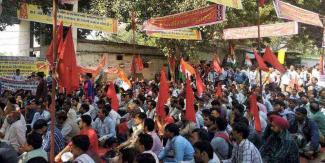 BETWEEN the 25 and 28 of September the DTC Workers Unity Centre conducted a strike ballot across all the Delhi Transport Corporation Depots in the city. In total, more than ten thousand votes for the strike ballot were cast by DTC workers in over 40 depots across the length and breadth of the capital. On each day voting started at 5 AM in the morning when workers come in for the first shift of the day and went on till 5 PM when the last shift for the day starts.

The strike ballot is an unprecedented move taken by the union in the DTC where the last strike happened in 1989. Both contractual and permanent workers of the DTC participated and voted enthusiastically in the strike ballot even though in many depots the Depot Managers dissuaded the workers from participating in the voting. A team of lawyers acted as Observers for the voting process. The counting of the ballots took place on 29th September at DTC Headquarters in Indraprastha Depot. 10,069 workers, i.e. an overwhelming majority of 98% workers, voted in favour of the strike.

The strike would focus on three basic issues namely equal pay for equal work, taking back the circular on the reduction of salary and no private buses in DTC. The situation has become more urgent after the Delhi High Court quashed on technical grounds the notification of the Delhi Govt. which had revised the minimum wage for skilled, semi-skilled and unskilled workers. DTC and Delhi Government could have continued with the revised wages but it preferred to take advantage of this HC order for retreating from its own decision. DTC workers had protested earlier and met the Delhi Transport Minister Gopal Rai multiple times but to no avail.

With increasing fare of the Delhi Metro and pollution DTC remains the best solution for a robust, affordable and environment friendly public transport. DTC has to be strengthened and the DTC workers have to be given decent wages, dignity and security of employment.
On 22 October, the DTC workers held a Namak-Roti-Mirch (salt-chapati-chillies) dharna at the Indraprastha bus depot reminding the AAP Government of its broken promise to regularise contract workers. They raised the slogan “Aaj karo, urgent karo, sabko permanent karo”, ( Make all workers permanent NOW) which was the slogan that the DTC workers had raised as they went to greet Arvind Kejriwal on his very first day as. Delhi CM. The dharna referred to ‘salt-chapati-chillies’ to highlight what the daily wage contract workers’ families are forced to subsist on.

The DTC Workers Unity Centre also released a short film ‘Chakka Jam’ - showing a glimpse into the homes and daily lives of the contract workers. As we go to press, the workers are preparing for the Strike on 29 October.