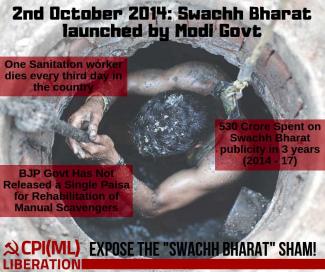 PRIME Minister Narendra Modi’s Swachh Bharat Abhiyan completed four years this 2nd October. On 15th September, the PM launched a two-week long cleanliness drive Swachhta Hi Seva Campaign, where he tried his best to pose for the camera while “cleaning” the premises of Baba Sahib Ambedkar Higher Secondary School in Delhi's Paharganj. The godi media went gaga over this choreographed drive. Soon top BJP Ministers, from Rajnath Singh to Dharmendra Pradhan, followed the footsteps of the PM, not missing the photo-ops with jhadu in hand. From dhongi babas like Sadhguru Jaggi Vasudev and Sri Sri Ravi Shankar to Bollywood superstars like Amitabh Bachchan and Akshay Kumar to industrialist Ratan Tata hailed the PM for his “historic” Swachhata mission. Social media was flooded with colourful photos and videos about Swachh Bharat. Marathon programs on the so called swachhata with celebrities of entertainment industries went on and on leading Television channels.  But something was completely missing from this idea of Swachh Bharat – the sanitation workers of the country!

When this broom wielding drama with politicians and celebrities was going on, we saw another horrifying image of our “Swachh Bharat”. An 11 year old little boy, walking up to his dead father’s body at a crematorium in the national capital, moving the sheet from the face, and incessantly crying. The father, Anil, was a manual scavenger. When he was cleaning the sewer the rope around his waist snapped and he fell into the sewer. After his death, the family didn’t even have the money to cremate him. Behind the façade of Swachh Bharat, according to the data collected by the Safai Karmachari Andolon, one sanitation worker dies every third day in the country (India Today, September 26, 2018).

Though manual scavenging is banned as per the Prohibition of Employment as Manual Scavengers and Their Rehabilitation Act of 2013 (came into force on 6th December, 2013), sanitation workers are still being forced to manually clean sewers and septic tanks. The Section 7 of the Act clearly says: “No person, local authority or any agency shall, … engage or employ, either directly or indirectly, any person for hazardous cleaning of a sewer or a septic tank.” The Swachh Bharat program doesn’t even attempt to enforce the 2013 law forbidding manual scavenging – instead the campaign, by encouraging the building of toilets with septic tanks, are essentially perpetuating manual scavenging!

Further, the sheer absence of any safety equipments and most importantly, the vicious nexus between the Government and private agencies mercilessly kill the sanitation workers. As most of the safai jobs are now contractual in nature – it makes the sanitation workers more vulnerable to inhuman exploitation. Private companies, most of the times, don’t provide any safety equipment, don’t follow required safety measures and run away in case of accidents or deaths of sanitation workers. And, the Government machinery actively assists them, often in bizarre ways. In the case of the death of four manual scavengers in Mumbai in the beginning of New Year, the police arrested the crane operator for “causing death by negligence” - not the contractor in charge! A recent study on the deaths of 97 manual scavengers across the country has shown that no FIRs were filed in most of the cases, and the victims’ families were also not compensated. Even if cases where FIRs were filed, there was no prosecution at all! (The Telegraph, October 11, 2018).

The Swachh Bharat campaign has also unleashed violent and coercive measures on the people in the name of ending open defection.  The drive to end open defecation has absurdly proceeded on the basis of inflicting indignities on poor people who have no access to private or public toilets. Early in the morning on 16 June 2017, Comrade Zafar Hussein, an activist of CPI (ML) in Pratapgarh, Rajasthan, was brutally kicked, punched and beaten to death by municipality staffs at the instigation of Nagar Parishad commissioner Ashok Jain when he resisted their attempts to take photographs and videos of poor women from the Bagwasa Kacchi basti who were going to defecate in the open. Shockingly, within one year of Comrade Zafar’s death, the Rajasthan police has cleared the civic officials of all charges.

Besides the Government’s and private agencies’ direct role in perpetuating an exploitative system, the Judiciary’s role on the question of sanitation workers is also equally disturbing. For instance, few months back, the Madras High Court fined a Dalit couple who alleged that the Anna University Dean forced them to practice manual scavenging and also the Dean’s husband sexually harassed the woman worker. The judgment shockingly said, “a sweeper cannot complain that she cannot be compelled to clean up the toilet, therefore, making a complaint that the scavenger was compelled to clean up the toilet, is wholly unacceptable.”! (The NewsMinute, February 26, 2018).

In media and public discourse too, there is a glaring silence on the question of sanitation workers. The issue of sanitation is always looked upon as a middle class problem, quite obnoxiously. We often see newspaper headlines of garbage piling up in our “beautiful” cities as sanitation workers are on strike, conveniently forgetting why they are on strike and overlooking the tremendously exploitative Government – contractor nexus unleashed on them. Only death probably makes the sanitation workers “newsworthy”! Voices who dare to expose the practice of manual scavenging often face vicious harassment. For example, after the release of Divya Bharathi’s searing documentary on manual scavenging, Kakkoos (Toilet), she has faced harassment, abuse and death threats. After the release of the film, Bharathi was bizarrely arrested on July 2017 for participating in a student protest in 2009!
The Fightback of Sanitation Workers

But the sanitation workers are fighting back across the country, from Karnataka to Delhi. Under the banner of AICCTU, contract powrakarmikas (sanitation workers) continued massive protest for several days in Gangavathi, Karnataka demanding their due wages for last nine months, direct payment to all contract workers and abolition of the contractual system. Braving police repression, the East Delhi Municipal Corporation sanitation workers’ 28 day long strike forced the authorities to accept their demand of regularization of jobs. On 25th September, thousands gathered in the national capital in a massive protest against continuous sewer deaths in Delhi and across the country. Those who lost their family members in sewer deaths and sanitation workers shared their horrifying experience and the hollowness of Modi’s Swachh Bharat.

The protesting voice of the sanitation workers and trade unions is becoming stronger day by day. They have come to the streets several times demanding timely payment of wage, medical facilities, and basic safety equipments like gloves, gumboots, face masks etc and adequate compensation for the deceased workers and their bereaved family members. The Governments must also use modern technologies for cleaning of sewers and septic tanks. Most importantly, the demand of rehabilitation of manual scavengers has emerged powerfully in the struggle of the sanitation workers. Manual scavenging is an inhuman casteist practice and it must be abolished. To eradicate caste, manual scavenging must end.

The Modi Government has completely ignored the sanitation workers and only concentrated on the photo-ops of Swachh Bharat, while our godi media looks the other way. But the fight of sanitation workers will go on as a song from Kakkoos captures the anger that has been brewing up over the years –

“Oh men and woman
you move away closing your nose
hundreds of stories of how we die
of suffocation prevails here
getting sick, getting rotten..
We will rise up and raise our
voice..
We sweep the death
and life above our heads
we will tear the “MANU” who said this fate,
and clean our ass with it.”