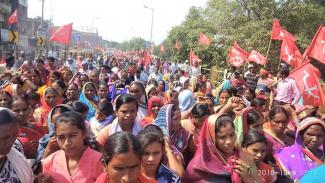 THE CPI(ML) organized a massive Oust Modi Save the Country rally at the Block Maidan in Tilaiyya, Koderma on 8 October 2018 which was attended by people from Koderma Lok Sabha constituency.

Leading up to the Rally, a 175 km padyatra was organised from Gandeya to Tilaiyya in Koderma on 28 September (Bhagat Singh Jayanti) under the Oust BJP-Save Democracy-Save India-Save Jharkhand campaign. The yatra was led by former MLA Com. Vinod Singh and Raj-dhanwar MLA Com. Rajkumar Yadav along with other leaders from the CPI(ML).

Carrying banners and flags and resonating with slogans, the Yatra started from Gandeya and proceeded via Dasdih, Maheshmunda, Ba-hadurpur, Pitkoriya, Bengabad, and Chhotki Karagdih. After covering 38 km it reached Navadih where it halted for the night. All along the way, hundreds of people were present to welcome the Yatra with flowers and refreshments. 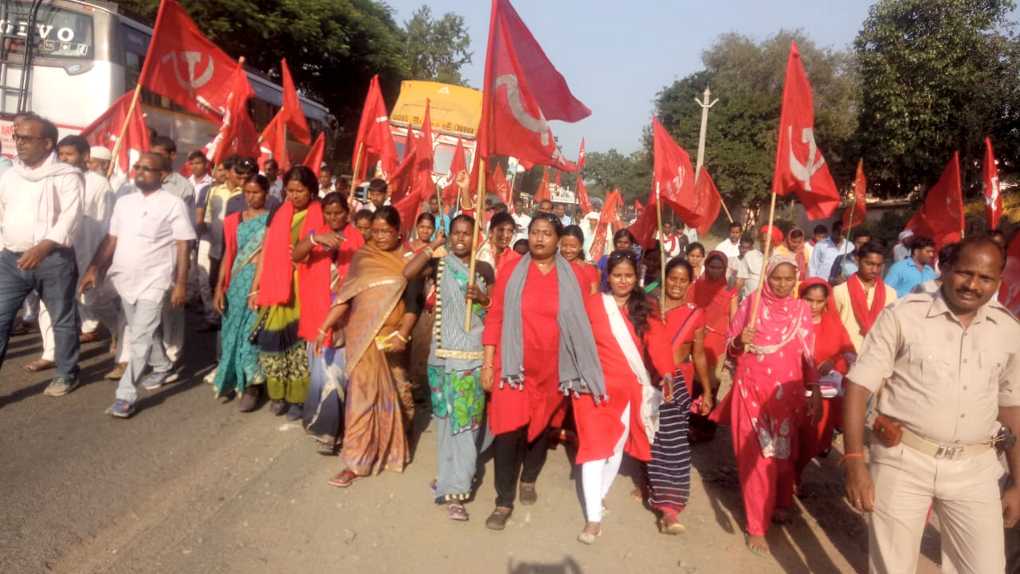 Next day, at 9.30 am, a Nukkad Sabha was held at Navadih Chowk after which the Yatra proceeded via Lataki to Mirzaganj where it participated in the 8th death anniversary program of CPI(ML) leader Ibnul Hasan Basru. After paying tributes to the beloved Comrade the Yatra proceeded to Jamua where a Nukkad Sabha was held attended by hundreds of people and addressed by comrades Vinod Singh, Raj-kumar Yadav, Rajesh Yadav, Jayanti Chaudhary, Rameshwar Chaudhary, Puran Mahto and others. The Padyatra then traversed through Tetar and Aamo and reached Palamo where it halted for the night.

On the third day, on 30 September the Yatra began with a Nukkad Sabha at Kodambari Chowk. By this time more than 500 people had joined the Padyatra. The Yatra was welcomed in a special way with ‘Tasa’ playing, which is a traditional welcome of the dalits. The ‘Tasa’ party not only welcomed the Yatra but when it started on its way, 100-150 dalit women accompanied them playing ‘Tasa’ for 20 km until the next halt, Khori Mahua. After a Nukkad Sabha at Khori Mahua, dalit woman leader Kaushalya Das, with her husband Rajkumar Das, led the Yatra team up to Rajdhanwar Bus Stand where hundreds of people welcomed the members with flowers. A Nukkad Sabha was held after which the Yatra proceeded 12 km to Mansadih for another mass meet-ing and the night halt.

On Day 4, October 1, the Yatra reached Baramasia Chowk in Birni Block where they were given a festive welcome by thousands of people led by Comrade Sitaram Singh. Each member of the team was welcomed by presenting a red ‘gamchha’ (towel) and red flag. About 300 people also joined the Padyatra at this point. After visiting several areas in the Block, the Yatra stopped for the night at Beko village in Birni Block. On day 5, the Yatra set off from Beko and proceeded 25 km through Markachho, Tetran, Pipacho and Jamo to arrive at Jainagar. Meetings were held at the above-mentioned 5 places where the common people evinced great support for ‘change in Koderma’ and great love and affection for the members of the Yatra team. 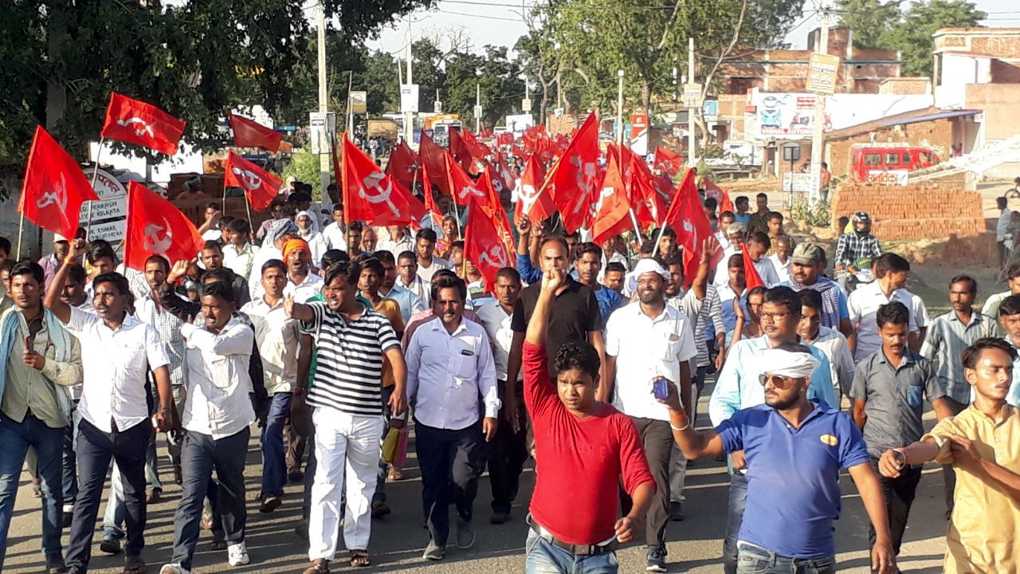 Comrades Vinod Singh, Rajkumar Yadav and several other leaders speaking at the meetings during the Padyatra said that farmers, workers and traders suffered great distress due to the note ban but BJP President Amit Shah’s son Jay Shah profited to the tune of thou-sands of crores. Black money, instead of coming back to the country, increased by 50% and scamsters ran away abroad with thousands of crores of rupees looted from the common people of India. Those who promised ‘achche din’ (good days) have so far caused 16 starvation deaths in Jharkhand of which 13 were due to ration cards not being linked to Aadhaar. They called upon the people of Jharkhand to stand firmly with the CPI(ML) to oppose this anti-farmer anti-poor government.

A standing team of 10-12 ML leaders including the former MLA and present MLA remained constantly with the Yatra. 500 to above a 1000 people were at various points to welcome the team members and at-tend the mass meetings.

On the day of the rally, the rally ground was filled by thousands of men and women, with red flags in their hands and slogans on their lips. The roar of ‘Oust BJP, Save India’ could be heard for miles. The rally, attended by thousands of people, began with a minute’s silence for the martyrs followed by revolutionary songs by the Jan Sanskriti Manch team Prerna. 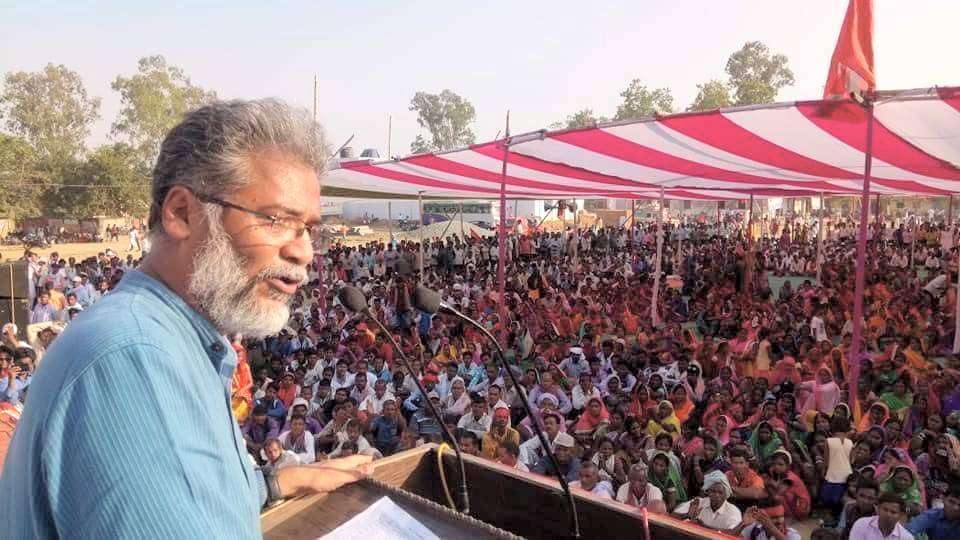 Addressing the rally, General Secretary Com. Dipankar Bhattacharya reminded the people of the similar kind of massive turnout at the rally held in Patna on 27 September which declared that in no uncertain terms that it is time for Modi to pack up and go, as it is clear now that the coming of him again was nothing short of a terrible disaster for the country.

Gujarat MLA Jignesh Mevani addressed the rally as guest and made a spirited call to the people of Jharkhand to support the CPI(ML) and said that the greatest service to the nation today would be to throw out the Modi government. He said that the true character of the government has been exposed by the incident at Giridih where a dalit youth who asked a question about ‘achhe din’ was beaten and silenced in the presence of the MP and MLA. The falsehood of the so-called Gujarat model has also been thoroughly exposed. Farmers are forced to commit suicide and the people are reeling under unprecedented price rise. If Bhagat Singh had been alive today he would have stood with the Left forces and fought with all his strength against this fascist government. 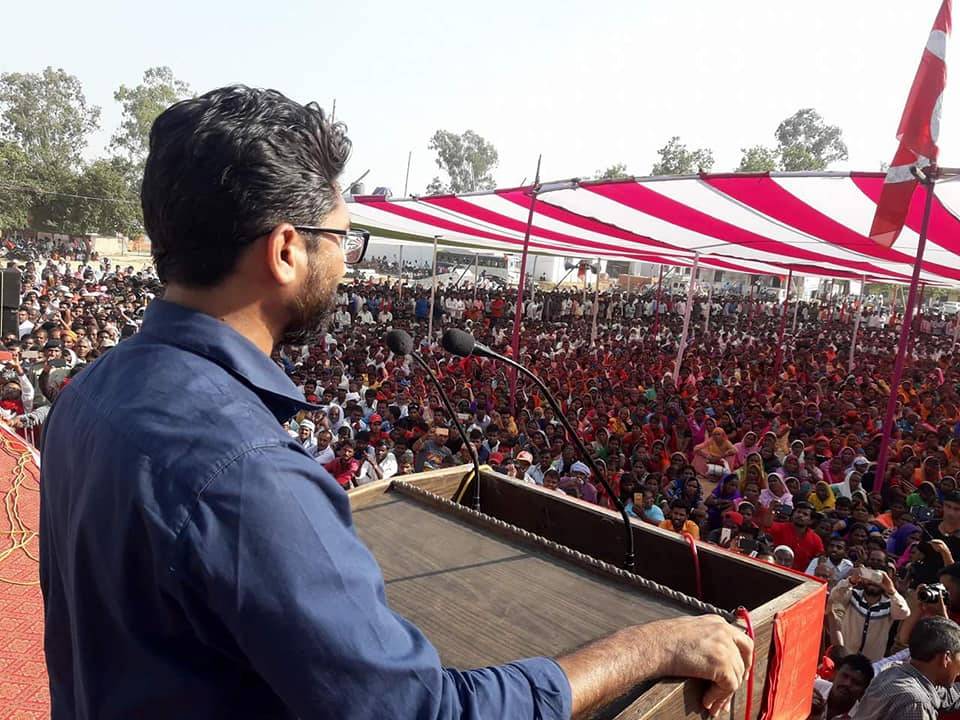 JMM MLA Jagarnath Mahto said that he and his party stands fully in support of the CPI(ML) in their struggle in Koderma. Marxist Coordination Committee MLA Arup Chatterjee said that it is the Left which fights first and strongest for people’s issues, and appealed to the people to vote for the CPI(ML) in Koderma. Former CPI(ML) MLA Com. Vinod Singh said that we must follow in the path of Ambedkar, Bha-gat Singh and Mahendra Singh to save Jharkhand and India to throw out the current fascist government. CPI(ML) MLA Com. Rajkumar Yadav appealed to the people of Koderma to hold the Modi government accountable for all its failures and establish the people’s claims at ground level by supporting the CPI(ML).