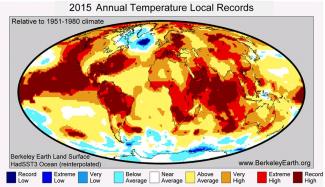 Implications For India and the World

THE Intergovernmental Panel on Climate Change (IPCC) came out with this latest report earlier this month. It is a particularly devastating report, stating clearly that previous estimates of the global efforts required to prevent a climate catastrophe need to be recalibrated.  It was previously believed that the world needed to limit global warming to a 2°C increase in temperature over the pre-industrial era; the IPCC’s revised estimates now tell us that the world cannot afford to let global warming exceed 1.5°C.

Numbers apart, it does help to look at the existing and future material manifestations of climate change around us. Coastal Odisha and Andhra Pradesh are currently recovering from the immediate aftermath of Cyclone Titli – and we can now expect more frequent and intense cyclone-like episodes. Warmer weather and waters hold much more energy, and will add more intensity and power to the destructive potential of cyclones such as Titli. For countries like India whose economies are hugely dependent on agriculture, and rain-fed agriculture at that, climate change will inevitably lead to catastrophic changes. This is because global warming will cause increasingly unpredictable rainfall patterns, extreme weather events such as droughts, floods and heat waves, fast-diminishing yields from agriculture and crop failures. Growing food in India will therefore become much harder and given increased salination and ocean acidification, the fisheries sector supporting some of the country’s most vulnerable communities could also take a major hit.

In other words, India’s geography makes it extraordinarily vulnerable to climate change. The situation is exacerbated by runaway pollution, unplanned “development”, deforestation, lack of disaster-preparedness and widespread extreme poverty. To top it all, current global warming in India (at 1.2°C) is actually higher than the global average of 1°C. What we have on our hands is a clear existential crisis. This crisis, as we can see, is the result of a deadly combination of natural (read geographic) and manmade elements.

What exactly does the latest report say? Why have the temperature rise estimates been reduced from 2°C to 1.5°C? Simply put, because climate science now tells us that overshooting the 1.5 °C threshold could trigger events which would literally finish off humankind.  After a 1.5°C rise, the consequences of climate change will increase at an alarmingly fast and dangerous rate. This exponential rise in risk over the 1.5°C threshold is what should alarm us, causing as it will a complete collapse of food yields and extreme levels of human displacement. Again, the brunt will be borne by the poor in ‘developing’ countries. This impending catastrophe is knocking on our doors. At the current rate, the world will reach the 1.5°C threshold between 2030 and 2052, according to the report. What’s more, it is going to be incredibly difficult (though not impossible) to keep the warming within the specified limit of 1.5°C by the end of the century.

It is indeed tragic that in order to achieve this difficult target, we will first have to defeat the climate naysayers who are unfortunately in position of massive power. The US, of course, is the very first in this list of stubborn and arrogant naysayers and obstacles to effective climate action. For years together, it has single-handedly stymied global efforts to counter climate change. The Trump administration has chosen to discredit the recent IPCC report, and continues to actively promote fossil fuels like coal and gas in the name of “jobs” and “economic growth”. With the Trump regime in place, the danger presented by the US obduracy and bullying has only increased. In fact, the world will probably have to find an alternative to the UN-led climate change approach, vulnerable as it is to US intimidation and international corporate lobbying. This alternative plan will have to depend on the strong alliances between the poor and developing nations on the one hand, and on global alliances between peoples’ movements led by the marginalized the world over.  It will be up to these alliances to counter what is now widely being called the “climate rogue behaviour” of the Trump administration.  These alliances will have to work towards the twin goals of rapid decarbonisation of global economies, reduction in consumption of the rich and the privileged, and a concomitant redistribution of resources.  The future of life on the planet is at stake.