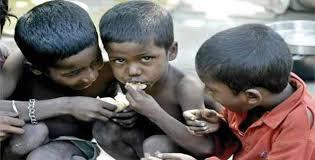 IN the 2018 Global Hunger Index (GHI) released on October 11, India stands at 103 among 119 nations, and hunger levels in India are categorised by the report as “serious”.

At least one in five Indian children under the age of five suffer from “wasting” (they have extremely low weight for their height due to acute under-nutrition). The only country with a higher prevalence of child wasting than India is South Sudan.

India’s indicators in the categories of under-nourishment, child stunting and child mortality have improved since the year 2000 but “the prevalence of child wasting has actually worsened in comparison to previous reference years. It stood at 17.1% in 2000, and increased to 20% in 2005. In 2018, it stands at 21%. South Sudan’s child wasting prevalence is at 28%.”

According to the report, in South Asia, “maternal Body Mass Index (BMI) and access to improved water and sanitation are more closely associated with rates of child wasting than household wealth, suggesting that a reduction in poverty alone may not be sufficient to correct the problem…Factors that could reduce child stunting in South Asia include increased consumption of non-staple foods, access to sanitation, women’s education, access to safe water, gender equality, and national food availability.”

Even as hunger remains at these acute levels in India, the Modi Government at the Centre and the BJP Governments in badly affected states continue to focus on fuelling divisive hate campaigns rather than addressing the vital questions of nutrition, sanitation, water, and social equality.

A Right to Food Campaign report found that in the last four years of Modi Raj, an estimated 61 people across 11 states died of hunger, with Uttar Pradesh and Jharkhand topping the list with 16 deaths each.

Uttar Pradesh is in the news every other day for a communal lynching, hate crime against friendships between Hindu women and Muslim men, custodial killing/fake encounter, police atrocity or other atrocities against women and Dalits, baby deaths in hospitals, and communal violence - as well as the Chief Minister’s decisions to change names of Mughalserai or Allahabad to more Sangh-friendly names. This state is also the one Modi contested and won from in 2014 - he reportedly won’t go back to the voters of Banaras in 2019.

Two brothers of of Khirkia village in Kushinagar district of Uttar Pradesh (UP), Feku and Pappu, 26 and 26 years old respectively, died of starvation within 16 hours of each other on 13 and 14 September 2018. They were both from the most oppressed Musahar community of Dalits.

We may recall how in May last year, before Chief Minister Yogi Adityanath’s visit on Thursday, Musahar Dalit families of Mainpur Deenapatti village in Kushinagar district were given two bars of soap, ‘Lifebuoy’ and ‘Ghari’, and a sachet of shampoo each and asked by district authorities to “clean themselves” before attending the public meeting. An Indian Express report on this episode quoted an ASHA worker as saying about the local people, “They earn so little. Their main worry is food.” But Adityanath in his upper caste arrogance, chose to humiliate the Musahars of Kushinagar by handing out soap and shampoo, while continuing to neglect their poverty and hunger.

In Jharkhand also, of the 16 starvation deaths, 9 were women, 6 were adivasi, 5 Dalit and 5 OBC). Many of these deaths were due to the failure in the delivery of rations, and/or pension, thanks to problems in linkage/authentication of Aadhaar cards. Yet the State Governments and the Centre continue to deny starvation deaths, blame the deaths instead on various diseases, and push cash transfers instead of food rations and Aadhaar  authentication as the ‘solution’, while in fact these worsen the problem.