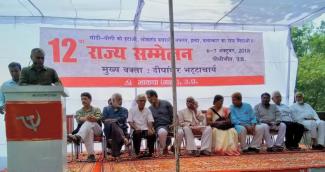 THE 12th Uttar Pradesh State conference was held in Pilibhit on 6 and 7 October 2018.

Addressing the open inaugural session, Party General Secretary Dipankar Bhattacharya said that the Modi government has divided and destroyed the country and betrayed the people. This government is running on the disastrous policy of Destroy and Rule, Deceive and Rule, and Divert and Rule. The people of the country are now ready to settle accounts with the Modi government. The same Uttar Pradesh and Bihar which had given the BJP more than 100 seats in the 2014 elections are going to bowl them out for zero and pay them out for their double betrayal.

The General Secretary pointed out that in the same Western Uttar Pradesh where the BJP-RSS played the card of communal polarization, farmers raised the slogan of ‘Not Jinnah but Ganna (sugar-cane)’ and taught the BJP a stinging lesson in the Kairana bye-election. Farmers made it clear to theModi government by marching to Delhi in massive numbers, despite being attacked by lathis, water cannons and tear gas shells, that it is they who are the true voice of the country. The whole country saw that the government which does not have water to provide the farmers with irrigation has enough water to shoot water cannons at them.The inaugural session was also addressed by CC member Krishna Adhikari and senior leader Advocate Ajay Shamsa. Senior leader Allauddin Shastri chaired the session which was conducted by District Secretary Devashish Rai. Earlier, the guests, delegates, and observers were welcomed by Party leader and Pilibhit Bar Association President Kishan Lal Advocate. PB member Swadesh Bhattacharya, UP in-charge and PB member Ramji Rai, Central Observer and CC member Rajendra Pratholi, outgoing State Secretary Sudhakar Yadav and other leaders were present on the occasion. The main streets and markets of Pilibhit had been decorated with red flags and banners for the conference. Prior to the conference, a rally was organized from the railway station to the conference venue.

The delegate session in the evening was first addressed by leaders of other Left parties: CPI State Joint Secretary Arvind Raj Swaroop and CPM State Secretarial Board member Brijlal Bharti. Next, veteran Party comrades—Allauddin Shastri, Belarani, Atri Kumar Rishi—were honoured on the dais. Two other veteran comrades—Mahatiyaji and Anantram Bajpeyi—could not be present due to ill health, and it was announced that they would be honoured at their homes.

The outgoing State Secretary then read the political-organisational report based on the work done over the past 3 years, also comprising the targets for the next 3 years. Fighting the fascism of the BJP-RSS was identified as a major challenge and preparations for the 2019 elections would have to be done on a war footing. 47 delegates participated in the discussion on the report. Important suggestions and amendments were accepted and included after which the report was passed unanimously.

1.    All ‘encounters’ in the Yogi Raj are fake encounters. The conference demands a Supreme Court-monitored enquiry into all the encounters; Rs 5o lakh compensation to the families of all killed in these encounters; employment for one family member and full arrangements for education of the children; Rs 25 lakhs compensation and free medical treatment for all those injured in the fake encounters.

2.    The Yogi government is misusing the National Security Act and is arresting political rivals, Muslims, backward sections and dalits under this Act. The conference demands the release of all those arrested under the NSA and the end of this draconian law.

5.    Cases of communal violence in Uttar Pradesh including Muzaffarnagar and Kasganj should be heard in special courts; the guilty should be punished and the victims should receive adequate compensation and rehabilitation.

6.    State-protected attacks on dalits, Muslims, and women should be ended immediately.

7.    The 2015-2017 survey report about shelter homes in Uttar Pradesh should be made public. There should be a CBI enquiry into cases of disappearance of girls and women in the shelter homes and cases of sexual violence and harassment against them.

8.    Acquisition of fertile land from farmers in the name of Ganga Expressway, Freight Corridor, 4-Lane Highway, and Gas Pipeline should be stopped. Farmers whose lands have already been acquired should be compensated with 4 times the market rate; one member of each affected farmer family should be given a job in the concerned project; displaced families should be rehabilitated.

10.    Survey of landless persons and allotment of housing and farming land to them should be done. Landless persons who have been given pattas should be given possession of the land. A commission should be constituted to identify lands hidden or stolen from sealing, and the lands should be rid of the landlords and distributed among the poor, the landless, and destitute women.

11.    The Forest Rights Act should be implemented speedily and adivasis and other traditional forest-dwellers should be allotted land; education, housing, health, water, electricity and rights to small-scale forest produce should be ensured in forest-villages.

12.    Displacement of people in the name of reserve forests, buffer zones and sanctuary forests should be stopped immediately and oppression of villagers should be ended.

13.    Sewers should be cleaned by machines, manual scavenging should be ended, and livelihood, education, health and housing of sanitation workers should be guaranteed.

14.    Eviction of the poor in the name of government land should be stopped immediately and poor families living for decades in a place should be allotted land in the same place.

15.    Anganwadi, Rasoiya, ASHA, ANM, Shiksha Mitra and all other contract-honorarium workers should be given equal pay for equal work; they should be adjusted against vacant posts and given all facilities given to regular workers.

16.    All construction workers should be registered in the Labour Department and given benefits of welfare schemes.

17.    Arrangements should be made to stop losses due to stray cattle and such losses should be compensated.