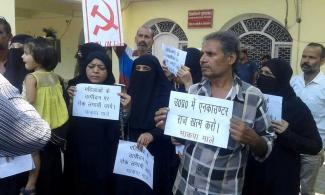 THE killing of Vivek Tiwari in police firing in Lucknow has put the UP Police and the Adityanath government on the back foot. Such killings are no aberration in Uttar Pradesh, in fact the UP government routinely showcases and celebrates such killings as proof of the government’s commitment and progress towards a crime-free Uttar Pradesh. But while most victims of such extra-judicial or custodial killings have been Muslims or Dalits from an underprivileged background, Vivek happened to be a staffer with the IT major Apple and belonged to the privileged section of society in caste and class terms. In fact, his family made no secret of the fact that they had celebrated the anointment of Yogi as the CM of UP never anticipating that one of their own would be meted out a Kashmir-type treatment by the police.

The Modi-Yogi model of governance is all about normalising extra-judicial violence whether unleashed by the police in the name of encounters or by thug squads in the name of upholding the beliefs and customs of the majority community. Modi and Amit Shah had perfected this model of governance in Gujarat and Yogi Adityanath is now replicating it in Uttar Pradesh. As many as 365 cases of custodial deaths have been reported in UP in the ten months between April 2017 and February 2018. The first ten months of the Yogi regime witnessed 921 alleged encounters in which 33 persons were killed. Just a week before the killing of Vivek Tiwari, the UP Police even conducted a live encounter in the presence of media-persons, shooting down young Mustakim and Naushad at Aligarh in the early hours of 20 September.

This model is naturally incompatible with the paradigm of rule of law and the principles of justice. We see a complete subversion of the democratic process whereby the rulers have secured themselves with absolute impunity and made sure that the process of justice is fully neutralised right from the stage of filing of complaints and investigation to the subsequent stages of trial and judgement. The serial killing of witnesses, mysterious deaths of judges and selective prosecution of cases are all part and parcel of this Sanghi model of statecraft. The police are rewarded for every encounter killing and in the case of Vivek Tiwari even as the DGP and the CM have condemned the killing, we see a social media campaign in support of the accused.

Fascism manages to normalise this extra-judicial process by reassuring the majority that the violence is reserved only for ‘the other’. But the tragic killing of Vivek Tewari tells us that there is no permanent or assured exemption for anyone. Safety and security are indivisible – if we want to stay safe and secure and go about our own lives in our own free ways, we must apply the same norms for others and defend the same standards of safety and security, freedom and justice for all.  The shocking killing of Vivek Tiwari should serve as an eye-opener for the whole of India to the perils of extra-judicial violence.

It is significant that while the executive wing of the state is bent upon crushing democracy, the judiciary still occasionally restrains the state and upholds the constitutional liberties of the citizen. The Delhi High Court decision to set free human rights campaigner Gautam Navlakha, who was sought to be arrested by the Pune Police under the draconian UAPA, will go down as a landmark verdict in defence of the Constitution and the basic tenets of liberty and justice. Encounter Raj, mob lynching and witch hunt against human rights activists are three key props of the ongoing state-led war on constitutional liberties and natural justice. Regardless of identity and ideology, the Indian people must fight back unitedly and resolutely to defend the Constitution in the face of the fascist offensive. The normalisation of the ‘police state’ must be stopped by all means.