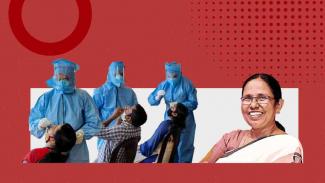 KK Shailaja, popularly known as Shailaja “Teacher” made her mark as Kerala’s Health Minister, during the Nipah virus attack, and then during the Covid-19 pandemic. She received acclaim for her exemplary work, not only in India, but internationally. And she was reelected with the largest margin of victory ever in the history of Kerala Assembly elections. No doubt, she contributed in a big way to what People’s Democracy, the CPIM organ, reminds us was a “collective effort” to buck Kerala’s usual pattern and re-elect the LDF for a successive term for the first time since 1977.

With this impressive track record, KK Shailaja should have been a shoo-in for Health Minister once again. But, in a move that made no sense to any observers of politics in Kerala or India, Shailaja was dropped from the cabinet, and instead given the post of Party Whip (a largely ceremonial post in a disciplined party like the CPIM). In defence of this decision, we have been told that the Kerala State Committee of the CPIM decided that new faces should be given a chance, and so no Minister from the previous cabinet has been given another term. Further, the State Committee had also previously decided, to the same end, not to field any MLA who had already served two terms.

Let us address these, and some other, arguments in defence of this decision to drop KK Shailaja as Health Minister. But before we do so, let us clear the air on one question being raised by many CPIM supporters on social media: do I, as a leader of the CPIML, have any locus standi to be commenting on a decision internal to the CPIM and its Kerala State Committee? My humble reply here is: everyone has every right to comment on a decision that affects the general public. This is not a decision about who will lead the CPIM party and in what capacity. The Kerala State Committee of the CPIM has every right to take any decision. But when it takes a decision that has implications for public interest, a decision about a cabinet post, and about the role assigned to an elected people’s representative – I have every right to question it, as a citizen of India and as a woman in Indian politics. As a leader of a left party, I question the decision out of concern for the health and wellbeing of the left in India.

Now, let us take a look at the arguments being offered

New faces must get a chance

Shailaja has welcomed the decision, respect her agency

I am intrigued to see the invocation of the concept of “agency” in this context. Shailaja did not make a personal decision to step down as Minister; she cheerfully and gracefully accepted a decision made by her party.

But her acceptance is not enough to persuade others to accept an unreasonable decision. Hers cannot be the last word on the subject, because the harm of the said decision is not to Shailaja alone: it affects public health; it affects the future of gender policy in political parties; and it affects women in politics.

It sends the message that women are most admirable when they eschew ambition and embrace decorum and discipline. As we laud these qualities in Shailaja, should we not ask ourselves if we even expect a similar lack of ambition in, say, a VS Achuthanandan or a Pinarayi Vijayan? When it comes to male politicians, do we not accept ambition as a given, and even welcome and enjoy the tussle between rival political ambitions?

In a communist party, the individual is not important

Once again, this is an admirable principle that can combat the culture of cults and foster a democratic culture.

But if this admirable principle is being applied to every Minister in the former cabinet, why not apply it to the CM as well?

When Vijayan is retained as CM while all experienced Ministers are replaced by newcomers, does it not give Vijayan, as an individual political figure, a disproportionate status and power? Does it really serve a democratic political culture when the decision seems to treat Vijayan alone as irreplaceable and “above the fray”, while deeming all others to be expendable?

There is another aspect of individuality, however, that must be emphasised. In the case of women (and persons from other marginalised and underrepresented categories), it is important to stress that they are individual women, and not merely token symbols of WOMAN as a category. When KK Shailaja is replaced by Veena George, it diminishes the individuality of both.

Critics of this decision do not understand communist culture, party discipline

It’s time to worry if a left party responds to questions from non-party “commoners” about a decision to drop their highly popular health minister during a pandemic, by saying “You have to be One of Us to understand this, you are bourgeois idiots who are too inferior to be able to appreciate communist party discipline and culture.”

Equating “communist culture” with opaque, arbitrary, arcane, and esoteric rules that the general public lacks the specialised consciousness to question, is very damaging for the Left's health.

The Left should be able to show itself to be more democratic and transparent, and more welcoming of criticism than any other party. To declare that your principles and decisions are “too complicated and abstruse” to be understood or criticised by those outside your fold, is better suited to authoritarian cults, not communist parties.

Asked to comment on the decision, CPIM Politburo member Brinda Karat clearly conveyed that the Kerala State Committee of her party was on its own when it came to defending its decision to drop Shailaja, saying, “it is for them to give an explanation and answer the questions which are being raised by their decision.”

Indeed, the onus is on the Kerala Chief Minister to explain his cabinet choices, and answer why he did not insist on retaining the Health Minister who won such laurels for his Government and his party in the middle of a global pandemic.