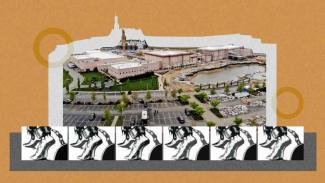 Caste violence reared its ugly head in the United States as Bochasanwasi Shri Akshar Purushottam Swaminarayan Sanstha (BAPS) was exposed by its workers for exploitative labor practices and human trafficking. The workers who had been recruited in India and taken to the US on ‘R-1’ visas that are usually granted to religious workers, were made to work in inhumane conditions and for starvation wages. The Federal Bureau of Investigation raided the premises of the Swaminarayan Temple in Robbinsville, New Jersey, reportedly the largest Hindu temple in the US.

The workers alleged that they had been taken to the United States under false promises and had their passports taken away once they reached the site. They were forced to work grueling hours with compensation as low as $1.20 per day, which is a tenth of $12 per day minimum wage in New Jersey, and prevented from taking breaks. The workers were even threatened as to not communicate with anyone outside of the community.

The close relationship between the Sanstha and Narendra Modi was pointed out by New York Times stating “The organization has strong ties with Narendra Modi, India’s prime minister, and his ruling Bharatiya Janata Party. Mr. Modi has said that Pramukh Swami Maharaj, the spiritual head who built BAPS into the largest Hindu sect in the United States before dying in 2016, was his mentor. Mr. Modi gave a eulogy at his funeral and laid the foundation stone for a temple that BAPS is building in Abu Dhabi.”

The fact that most of the workers were Dalits is once again a stark reminder that caste discrimination runs amok in the United States, with Dalits having little way of legal recourse when discriminated against. The BAPS temple had previously also been found employing a 17 year old minor, who died on the construction site in 2017, but seems to have evaded any public scrutiny. Caste discrimination once again came into focus as a CISCO employee complained of caste discrimination in 2020. Neither is this the first time that human trafficking and slavery has been involved with the issue of temple construction. In the year 2000 a high profile case emerged where a temple was constructed in the UK using slave labor with the knowledge of the then UK Home Office Minister.

Hindutva in the United States

As a racial minority, Indians have faced a long history of discrimination in the United States, with Punjabi immigrants playing a pioneering role since the late 19th century in California. Many South Asian students and academics have played crucial role in opposing racial discrimination and police atrocities in the US.

However Hindutva has sought to use the community in order to purchase political currency in Washington and in order to ensure its own acceptability in the international community. Pieter Friedrich, a US based South Asian Affairs Analyst, has exposed the flow of saffron dollars into the pockets of US politicians like Preston Kulkarni and US Senator Tulsi Gabbard, who has often positioned herself as a ‘progressive’.

Hindutva has played a key role in attempting to downplay any criticism of caste discrimination as a product of the ‘colonial gaze’. In a recent, high intensity debate in the Santa Clara county in the US, which has a high number concentration of South Asian American residents, the extent of caste discrimination became clear as did the extent that supporters of Hindutva will go to downplay the issue. As the Santa Clara County (California) Human Rights Commission debated whether to recognize caste as an axis of discrimination, the Hindu American Foundation, a major voice for Hindutva in the US, employed a particularly dubious piece of logic. It argued that the existing provisions against discrimination in the US are sufficient and inclusion of caste would associate the entirety of the Indian origin population in the US with caste discrimination. One is tempted to ask if the regular occurrence of caste based discrimination in US soil not affect Indian origin people or if Dalits are not Indians in the eyes of Hindutva?

Proponents of Hindutva play a particularly devious game in the United States and western world at large. While claiming their status as a racial minority, they do everything in their power to undermine the voices of minorities and ensure the continuance of white supremacy in the US. This is the basis of their alliance with Trump and the white supremacist groups within the US. This policy of running with the hares and hunting with the hounds will inevitably backfire.