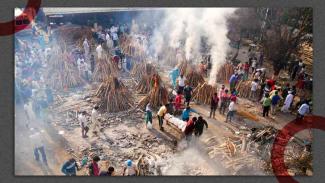 PM Modi’s televised tears have come far too late to convey empathy for those killed by Covid-19 or regret for his regime’s callousness that led to those deaths. It is clear that he does not weep out of sorrow for us and the loved ones we have lost, nor out of regret for his own role in those deaths - but because he would like us to feel sorry for him and spare him the criticism he has earned. But Modi cannot play a victim to the calamity he himself has brought upon the country.

Modi, who credited even falling global oil prices on his own “luck”, cannot now duck his own responsibility for the brutality of the Covid-19 second wave. He repeatedly credited his leadership for the so-called “victory over Corona” in the first wave – he cannot now blame the second wave disaster on the Opposition, “70 years of Congress rule”, or indeed on any other scapegoat. These avoidable deaths lie squarely at PM Modi’s door.

The RSS chief and several charlatan godmen are lecturing Indians on the need to replace “negativity” (code for criticism of the government, and indeed for any mention of the daily horrors of the pandemic) with an attitude of “positivity”. This enforced “positivity” adds insult to the injury of Indians abandoned by the government to fend for themselves in the pandemic, waging a daily, often losing battle for oxygen, medicines, hospital beds, vaccines, and even for the means to decently cremate or bury one’s dead.

The demand that Indians be “positive” in such circumstances is in itself highly insensitive. It is made worse by the callous and shameless language being used by the RSS and BJP to put a “positive” mask on the worst horrors of the pandemic in India. The RSS chief declared that those who had died of Covid-19 had been “liberated”, and that Indians must not be perturbed by death since it was all part of the “cycle of life and death.” A BJP leader, asked about the thousands of corpses in the Ganga and the mass graves on its banks, claimed that these are in keeping with the sacred Hindu tradition of “jal samadhi” (death by voluntary immersion in water)! Death stalks every village in UP now, and is fast spreading all over rural North India. The poor, lacking means and space to decently cremate their dead, are forced to bury them on river banks or leave them in the river, where the corpses wash up downstream in Bihar. But the shameless BJP which rules at the Centre and in UP too, tells us that what we’re smelling is not the stench of death but the scent of flowers.

Meanwhile, vaccines have dwindled, as have government messages urging citizens to seek vaccination, and there is already an acute shortage of the anti-fungal drug Amphotericin-B, leading to avoidable deaths of Covid-19 patients who developed “black fungus” due to unhygienic conditions. The vacuum of reliable and affordable healthcare for the vast majority of people, is paving the way for charlatans peddling superstitions and “miracle cures” as Covid-19 remedies.

The Modi regime is suppressing data on cases and fatalities: data crucial to shaping a proper response and saving lives. A Gujarati poet whose poem on “The Corpse-Laden Ganga” declared that “My Emperor has no clothes”, is being attacked viciously by the BJP’s troll army. People, and even hospital administrators, posting about oxygen shortage are being arrested as a threat to “National Security.” But these relentless attacks cannot suppress the questions. The continuation of the authoritarian and callous Modi regime itself is a recipe for the continued Covid-19 massacre. If India is to survive; if at least now, we are to prevent entire villages from being wiped out – Modi must go.