Skip to main content
Update 29 May 2021
Delhi Police Raids Twitter Office, Modi Govt Clamps Down on Freedom of Speech on the Internet 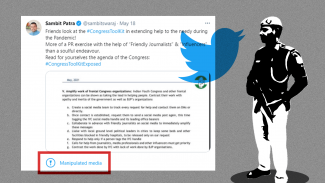 The Modi Government is bullying the microblogging platform Twitter again. The Delhi Police Special Cell on the evening of 24th May, raided the office of Twitter in the National Capital in connection with a probe over the alleged ‘Congress toolkit’, seemingly unaware that the office was closed due to the COVID lockdown. This has led to speculation that this has less to do with the ‘investigation’ and more to do with sending a message to the company.

Sambit Patra, national spokesperson of BJP, tweeted a screenshot of an alleged ‘toolkit’ by the Congress. The claim was that the relief work being carried out by the Congress (especially its youth wing) in different parts of the country during the ongoing crisis caused by the pandemic, was a PR stunt. The veracity of the claim was soon disputed by the fact-checking website Alt News, who pointed out that the letterhead of the claimed toolkit was forged. Twitter added a ‘Manipulated Media’ disclaimer on Patra’s tweet soon after.

The Ministry of Electronics and IT, in a letter to Twitter, swung into action in Patra’s defence claiming that the tag was an attempt to ‘derail and demean’ the government’s efforts. Following this, the Delhi Police Special Cell sent a note, as a precursor to the raid, to Twitter demanding an explanation for the tag. Previously, Twitter had run afoul with the government, when several international activists including Greta Thunberg tweeted in support of the Kisan Andolan.

Of course whatever is written in the so called ‘toolkit’ is perfectly within the purview of the law. The basic instruction is to publicize the work being done by the Youth Congress volunteers and contrast it with the near comatose state of the so-called largest ‘volunteer’ organisation in India, i.e. the RSS. Perhaps our PM feels that claiming credit for any work done (or not done) is his sole prerogative and feels threatened by the encroachment of his domain.

Twitter, we can recall, marked several tweets of Trump as manipulated media, when he was still President of the USA. In India, when Twitter does this for BJP leader Sambit Patra, the entire Modi Government leaps to attack and raid Twitter as an act of fascist intimidation.

After failing to curb the upsurge of mass protest during the protests against NRC-CAA as well as the Kisan Andolan, through police violence and threats, the BJP has decided to attack social media platforms in order to disrupt the channels of communication for citizens. Ironically Modi’s own rise has been ascribed to the subversive use of social media during the anti-corruption protests against the UPA government.

On February 25, 2021, the Ministry of Electronics and Information Technology (MeitY) and the Ministry of Information and Broadcasting (MIB) issued the Information Technology (Intermediary Guidelines and Digital Media Ethics Code) Rules, 2021 (the Intermediaries Rules). The Internet Freedom Foundation has outlined the rules as well as the anti-democratic and unconstitutional implications of the rules. It has also been pointed out that such onerous requirements and red-tape automatically means that any new disruptive challengers in tech will find it nearly impossible to establish themselves. This will be the death of Atmanirbharta (self-reliance) in its real sense.