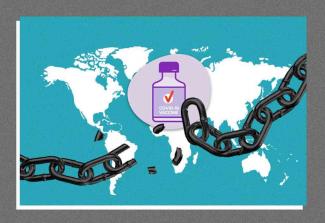 “There is no patent. Could you patent the sun?”
- Jonas Salk, inventor of the polio vaccine, on being asked why he did not patent his vaccine

The snail-paced vaccination program in India is a matter of major concern globally, not only due to the fact that the periodic waves of COVID will result in hundreds of thousands even possibly millions of preventable deaths and result in economic shutdowns, but also because such spread may lead to mutations that can render vaccines completely ineffective. This can effectively wipe out the painstaking gains made by the global scientific and medical community through immense sacrifice and take us back to square one. One of the hurdles to rapid vaccination is the meshwork of Intellectual Property regulations that prevents the free flow of technological knowhow, which has benefitted wealthy corporations at the expense of billions of poor in Asia, Africa and Latin America.

TRIPS and the Global IP Regime

In October last year, India and South Africa, along with 57 members of WTO proposed a waiver from certain provisions of the TRIPS agreement for prevention, containment, and treatment of COVID-19. For seven months, the proposal has made little progress due to opposition from the US, the EU, Switzerland, the UK, Japan and others. Modi’s much touted foreign policy, which played a major role in securing him a second term in 2019, however collapsed like a house of cards in the face of such opposition. While Modi engaged with a competition against China to win a point with ‘Vaccine Diplomacy’ by providing vaccines to the wealthiest nations of the world like Canada, maitri failed to flow both ways as no such reciprocal gestures have been available at the time of our need.

While in the early months of the pandemic, world leaders and corporate executives embraced a language of social collaboration, it soon emerged that under capitalism, profits will always triumph over people. Socialists around the world had criticized the attempts at allowing capitalist corporations to profit from the sale of vaccines, supporters of the system claimed that it is because of ‘profits’ that pharmaceutical companies were able to swiftly roll out the vaccines. This claim is simply a lie as most of the vaccines could only be developed because of generous amounts of public funding and publicly funded research1. Adar Poonawalla, who became the poster-child of India’s vaccine production prowess, was able to ramp up production precisely because it had received WHO funds specifically aimed at ramping up production since 20062.

The free flow and exchange of information that allowed for the development of the vaccines however was abandoned with a model that placed capitalist profit at the center of the vaccination drive3. Wealthy nations however have blocked any effective way for making the vaccines available to all for free. We are well aware how the US had even blocked India from even importing the crucial raw materials for the development of life-saving drugs as the second wave of COVID19 hit India in April. Under international pressure, the US has agreed to a partial waiver of IP regulations for vaccines4. This however is far short of the original proposal by India and South Africa that sought a waiver on all medical products essential to fight COVID19 including treatments, diagnostic kits, ventilators etc.5

The rich countries with 14% of the global population have 53% of the vaccines, much of which will go into stockpiling. The US, which sat on a stock of tens of millions of AstraZenca, even as it itself refused to authorize the vaccine, while other countries that had sanctioned its use even out of desperation failed to find imports. South Africa was forced to pay more than 2.5 times of the price for vaccines that the EU had to pay6. These demonstrate the very fundamental problem of a vaccination program that is driven by capitalism.

While the TRIPS waiver could help with speeding up the process of manufacturing vaccines, this is far from the solution we need. It has been pointed out that “Pharmaceutical companies may need to be incentivised to share knowledge and build capacity in developing countries to produce quality, generic versions of the vaccines”7. This leads to the fundamental problem of IP regulations that aim at protecting profits rather than seek to drive innovation. The idea that profits drive innovation has been proven false time and time again.
In order to remedy the situation, the People’s Vaccine Alliance8, a coalition of organizations from around the world has appealed for the following:

In the long term however, it is important to undo the damage that privatization has rendered to our healthcare incapable of fighting a serious crisis. People’s health and profit do not go hand in hand, and it may be now time to untangle the two.