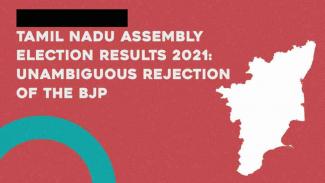 The results of Tamil Nadu assembly elections indicate a decisive rejection of the BJP and its alliance partners by the people of Tamil Nadu. Despite not being a huge wave or sweep compared to the Loksabha elections in 2019 where DMK alliance won almost all seats but for one which went to AIADMK, it is definitely a mandate against what people identified and rejected as the all-pervading omnipotent presence of BJP in remote controlling the state government through AIADMK.

At the same time, it is also a caution to DMK to respect the essence of the people’s mandate. The mandate was also a continuation of people’s struggles against imposition of Hindi, NEP, NEET, agrarian crisis, increasing domination of the centre and gradual snatching away of rights of the state and its autonomy in various ways.

In spite of being five cornered contests in all constituencies, practically, it was only a bipolar contest between DMK and ADMK alliances. It was amply reflected in vote percentage as well. ADMK did not fare as badly as was expected, since there was not much anti-incumbency: rather ADMK paid the cost of its alliance with BJP and the Modi government.

Analysing these election results as a summation of caste arithmetic, as some observers are doing, is completely wrong. The political stratification of society was much more visible. The much trumpeted ‘social engineering’ of ADMK turned into an utter failure and boomeranged. ADMK announced 10.5 percent compartmental reservation for Vanniyars, an MBC caste, claimed to be represented by PMK, as an election tactics of social engineering, at the fag end of its rule. Election results display that the tactics did not yield any desired effect. Even PMK could only win 5 seats out of 23 it contested. Likewise, clubbing together of 7 sub-castes of Dalits and naming them as ‘Devendra Kula Velalars’ under the ploy of elevating their status also has not yielded any positive result for BJP except in a few constituencies. The election results have punctured the myth that Devendra Kula Velalars are entirely with the BJP-RSS. The BJP cleverly stayed away from the demand of delisting Devendra Kula Velalars from SC list and also dumped Krishnaswamy, a Dalit leader, who articulated the same, by easing him out from the ADMK alliance. Only in regions like the west, Kongu Velalars (OBC), who are basically the regional power elite, like Kulaks and neo-rich, have backed ADMK more for its economic reasons of dominance in the region. It is quite natural that the Kongu elite lobby considered ADMK to be its natural ally for their local domination and power than the DMK.

BJP could win four seats riding on AIADMKs influence – two seats in western part and another two seats in southern part of Tamil Nadu. The anti-BJP mandate is obvious also from the fact that all known leaders of BJP, including its state president L Murugan, national secretary H Raja, former IPS Annamalai and former cine actress, Khushbu, had to face a humiliating defeat. BJP’s own candidates hesitated in displaying photos of Modi-Shah duo in their campaign. At least, more than 100 DMK candidates invited Modi to their constituency, through tweets, to campaign for their opponents so that their winning margin can be increased. Instead of being star campaigners, Modi and Shah turned into a laughing stock in Tamil Nadu. Ironically, BJP won same number of seats in 2001 in alliance with DMK then and in alliance with AIADMK now, after 20 years. In the last two decades, BJP tried its level best to emerge as a force to reckon with by contesting independently in all or majority seats but to no avail.

There are two parties that target the progressive aspects of Tamil Nadu and thoughts of Periyar and claim to dream of a Tamil Nadu without Dravidian parties and its values. BJP in the state, from the very beginning, aimed to destroy progressive values by making everything controversial. BJP’s opposition was from communal and obscurantist point of view while Seeman variety of politics, that claimed to challenge the thoughts of Periyar, was from a Tamil nationalist point of view. Seeman pitted Dravidian politics against Tamil nationalist politics and blamed Dravidianism articulated by Periyar to be responsible for the rise of non-Tamil Chief Ministers to the seats of power. Both hailed Hitler from their own point of view. This was the reason why a section of political observers saw the Seeman variety of politics as being closer to BJP’s. Seeman has not come up with any alternative strategy, perspective or plan for Tamil Nadu and its development. But it is commonly believed that he secured votes of young people of the state.

It is in this backdrop, it becomes a matter of concern that Seeman’s Naam Thamizhar Katchi (NTK) emerged as a distant third force in this elections in 2021. The party could not win any seat despite polling 10,000 – 15,000 votes on an average in majority of constituencies. Unlike the popular belief, around 30 lakhs votes, 6.7 percent of votes, secured by NTK may not strictly of voters who subscribe to Tamil nationalism. It may also be said that Seeman was the beneficiary, in this particular election, of the emerging thirst or quest for a third force in the politics of Tamil Nadu. There are debates that the rise of Seeman and NTK also represent a revivalist and reactionary vis-à-vis liberal and progressive aspect of the politics of Tamil nationalism in the state. The future shape of NTK and it’s politics needs time for evaluation.

Other forces like AMMK of TTV Dinakaran, a protegee of Sasikala, despite not being able to win any seat, is considered to be a spoilsport for ADMK, at least in 20 constituencies. Kamal Hasan, the only leader of MNM also lost to BJP in Coimbatore South with a margin of around 1500 votes. Makkal Needhi Maiyam (MNM) is poised for a disintegration as many members of leading core, disillusioned, are deserting the party one by one, after elections.