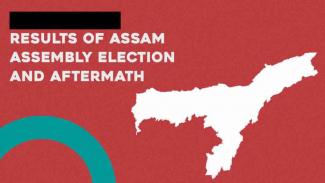 BJP’s politics of communal polarization paid off in Assam, with the BJP-led alliance getting 75 seats and being re-elected with a comfortable majority. Though they got 10 seats less than in the last elections, they have been able to expand and consolidate their influence in the Tea Tribe and Adivasi-dominant areas, all Tribal areas, main stream Assamese people, and also got majority of votes among Hindu Bengali, Nepali, and Hindi speaking people.

This time BJP did not ally with BPF (Bodoland People’s Front), instead allying with the newly-formed UPPL (United People’s Party Liberal), a party in the Bodoland area. In 2016, BPF won all 12 seats of Bodoland. This time they got only 4 seats, getting primarily non-Bodo, particularly Muslim votes. The UPPL got 6 seats and BJP won 2 seats. For the first time BJP penetrated in the Bodoland area by successfully polarizing Muslims and non Muslims. Out of 37 Tea community dominant constituencies, the BJP alliance got 34 seats, whereas in 2016 they got only 22 seats.

The BJP launched its communal campaign by declaring that the elections of 2021 in Assam were a “War of Civilization”, to save Assam from invasion of “Mughals”. Explaining this main poll plank, Himanta Biswa Sharma (now the new CM) said that Muslims are Mughals, and “Mughal” (i.e Muslim) civilization is the main threat to Assamese culture and civilization. They also widely propagated that they would implement the CAA (against which Assam had witnessed a huge mass agitation till last year) and will re-verify NRC: decisions they had already taken in their last term.

The BJP concentrated their attack on AIUDF and its president Badruddin Ajmal, using Islamophobic slurs. BJP said that AIUDF is a communal party, a party of “Miya” Muslims and scare-mongered that if the BJP was defeated, Badruddin would become CM, which would mean that “Miyas will capture power.”

Even the newly formed party AJP (Assam Jatiya Parishad) and the Akhil Gogoi led  RD (Raizor Dal) also targeted AIUDF and described it as a “communal” party and asked Opposition parties to distance themselves from AIUDF. Later, RD criticised the “Mahajut” (Opposition alliance) for accepting AIUDF as one of the components of the alliance. So these regional parties succumbed in the face of the BJP’s campaign - instead they ended up helping to foster a climate for communal polarisation.

The Mahajut comprised Congress, AIUDF, CPI, CPIM, CPI (ML) and BPF. Congress and AIUDF slightly increased their tally from 2016 election; both were increased by 3 seats. It is significant that Akhil Gogoi won from jail and contested independently. This time the strength of opposition within the Assembly  increased; among 126 Assembly, the number of Opposition MLAs is 50 which is more than it was in 2016.

The main difference between the last Sarbananda Sonowal government and the present one is that Himanta Biswa Sharma has concentrated power in his hands. He enjoyed massive support from not only BJP but other allies. The inevitable uptick in authoritarianism is already visible: before taking oath he suddenly transferred bureaucrats in his favour and appointed IPS officers, including one SP who was charged with Child Sexual Assault against a young Karbi girl.

The new government will try to expand and consolidate the gains of their election-time communal hatred. The Government’s NRC co-ordinator appealed to the Supreme Court for 100% reverification of NRC. The last BJP government had appealed to the SC for 20% reverification in border districts and 10% in other districts. This move is nothing but to terrorize Muslim people and exclude them from the citizenship register.

The new government forcefully evicted Muslim families in Sootea of Sonitpur district by labelling them as Bangladeshi encroachers; in spite of the fact that these people have their names in the 1951 NRC as well as in the present NRC.

The CPIML will work, in tandem with other Left and opposition forces, to take up people’s struggles, and mobilise people of Assam to recognise and reject the BJP’s communal politics.