Skip to main content
ELECTION 29 May 2021
Puducherry: BJP-led Government is Waiting in the Wings 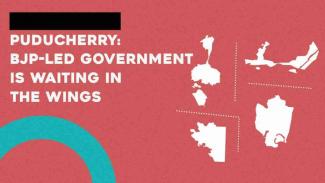 The BJP’s main game plan is to capture the power in Puducherry by hook or crook so as to make it a backyard of entry into South India other than Karnataka. It also appears to have succeeded in it. Now, the BJP is all set to run the Puducherry government either by having, to begin with, a combination of Rangaswamy as CM and BJP as Deputy CM or to directly take over the state very soon. It is only a matter of time. Unlike Bihar where it could only cut down the size of Nitish, the BJP could finish off its alliance partner ADMK in Puducherry.

The Congress, the incumbent party in power till the other day, was not allowed to perform while in power by erecting road blocks using the office of Lt Governor, Kiran Bedi and is now reduced to two seats in the wake of huge and unimaginable anti-incumbency factor. It was the anti-incumbency wave against the Congress that benefited BJP-NR Congress alliance to win majority in the state and not out of any positive choice. NR Congress led by Rangaswamy and the present Chief Minister has won 10 seats while BJP, DMK and independents secured 6 seats each in a 30-member assembly. The strength is further increased to 33 by nominating three MLAs, with voting right awarded by the SC recently, who are BJP leaders.

Independents are mainly dissidents of BJP and NR Congress. One of the independents, who defeated Rangaswamy in Yenam constituency, has already thrown his weight behind the BJP. Even before the new Chief Minister began his functions as CM (delayed because of Covid infection), the BJP has raised its tally to 10 (6 elected + 3 nominated + 1 independent) so as to stand equal to NR Congress’ 10. The day is not far when BJP could outnumber NR Congress through horse trading, and install its own CM and  capture power.