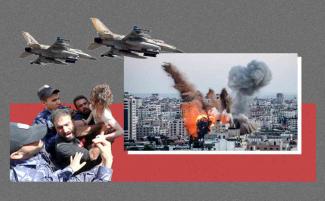 After 11 days of bloody mayhem, a ceasefire between Israel and Hamas was declared on 20 May this year. International media coverage of the recent developments in Palestine routinely refer to a ‘war’ between Hamas and Palestine; as an armed conflict between two powers. The fact however is that this was no ‘war’: it was a planned, well-executed, genocidal assault by Israel on Palestine. For 11 days, Israel launched genocidal airstrikes on Gaza targeting essential services like power supplies, hospitals and schools. Attacks were launched even on school playgrounds. Journalists, doctors and several children were killed by Israeli forces. Throughout this mayhem, Israel touted its usual excuse – that it was ‘provoked’ by the Hamas and has a right to defend itself. The ‘provocation’, in fact, was some crude homemade rockets shot by Hamas, most of whom were easily demolished by Israel’s sophisticated weaponry, supplied by its faithful allies such as the United States.

What really happened was a thoroughly unprovoked attack on the Al-Aqsa mosque in April by the Israeli police, a month before any rockets were hurled towards south Israel by Hamas. As several observers have noted, the police action in the Al-Aqsa mosque, on the first day of Ramzan (or Ramadan, as it is referred to in Palestine), was clearly designed to humiliate, subjugate, bully and terrorise Palestine. What really happened in Palestine was Israel attempting the ethnic cleansing of Sheikh Jarrah, a predominantly Palestinian neighbourhood in East Jerusalem. Armed lynch mobs of Israeli settlers attacked Palestinian homes, supplementing the official Israeli Defence Forces.

This recent spurt in violence is the latest in a long story of settler colonialism, of forced displacement, ethnic and cultural genocide. For the people living in Gaza, and also for the residents of the West Bank in Palestine, mayhem and massacres are nothing new. Israel has been illegally occupying vast tracts and controlling both areas for decades. Both Gaza and West Bank resemble vast jails where economic blockades enforced by Israel are a part of daily existence. Israel still controls access to the area, and over Gaza's air space and seacoast, and its forces enter the area at will. Fuel, electricity, imports, exports and the movement of people in and out of Gaza have been slowly chocked off, leading to life-threatening problems of sanitation, health, water supply and transportation.

All tall talk of ‘two sides’ to the violence, and all of Israel’s justifications for the right to defend itself, fly in the face of Israel’s own words and deeds over the decades. Israeli leaders have referred to Palestinians and Arabs as ‘grasshoppers’ who need to be crushed; as mosquitoes and wild animals destined to disappear. In 1948, David Ben-Gurion, the first Prime Minister of Israel, stated that Israel was not “obliged to state the limits of our state”. To begin with, in 1947, the United Nations carved the state of Israel for the Jews out of Palestine, giving Israel 55% of Palestinian land, an event that will probably go down as the most audacious legalised thievery of our times. Since then, Israel has blatantly violated every single international agreement. Over the decades, it has far overstepped the boundaries allocated to it by the UN. Today, Israel claims control over way more than 80% of Palestine. The planned forced evictions from Sheikh Jarrah this month are a part and parcel of Israel using its considerable military and political weight to literally throw Palestinians away from more and more parts of land that is legitimately theirs. Far from fighting for its legal and moral “right to exist”, Israel is waging a virtual holocaust against peoples struggling to protect their lands.

What makes the current violence even more despicable is the cynical and political manipulation of the conflict by Benjamin Netanyahu. Netanyahu is an unpopular leader in Israel today. He has been unable to cobble up a parliamentary majority in several consecutive elections. He has failed to establish a majority even after being given three chances to do so. Moreover, he is plagued by serious charges of corruption, which have been dogging him for a while now. Several political commentators have pointed out that this deliberate escalation of tensions in East Jerusalem has allowed Netanyahu to corner his opponents on the right – forcing them to support him. Netanyahu, for his political survival, needed to prevent leftists, rightists and Arabs from coming together as a rival faction to unseat him. Since the current violence has successfully rekindled fractures between Arabs and Jews, thus helping Netanyahu, speculation is rife that he had a hand in actively promoting and fomenting it. Now, the chances of Netanyahu coming back to power are brighter than they were before the conflict.

The Global Response: Signs of a Breaking Bipartisan Consensus in the US?

As Israeli forces continued to pound Palestine and attempt to forcibly take over Sheikh Jarrah, the Israeli Prime Minister Benjamin Netanyahu thanked 25 countries – including the United States and the UK – for their “resolute” support. For years together, Israel has banked on primarily the US and UK to carry forward its racist, expansionist and genocidal project in Palestine. In a recent statement brought out by the South Asia Solidarity Group, it was pointed out that the US has provided $146 billion dollars to Israel since 1948, and an additional $375 million worth of arms to Israel. Arms sales from UK to Israel have risen from £74 million in 2008-2014 to a £361 million in 2014- 2018. The US, by using its veto power in the UN Security Council, has repeatedly provided Israel with diplomatic immunity and freedom from sanctions for its horrendous war crimes.

The current spate of violence however indicates that the winds of support for Israel might just be shifting in the US. For years together, Israel enjoyed unconditional bipartisan support from both the Republicans and Democrats in the US. This bipartisan consensus is facing unprecedented and public challenges today. Progressive Democratic leaders including Bernie Sanders, Rashida Tlaib, Alexandria Ocasio-Cortez and others have gone on record, openly condemning Joe Biden and his administration’s support to the ongoing carnage in Palestine. They are pointing out that Palestinians have a right to live, that Israel is a apartheid state today. For probably the first time in decades, the pro-Israel lobby in the US is having to contend with strong opposition in the Senate and the House of Representatives. This support for Palestine, of course, is being strengthened by spirited political and civil society mobilisations against Israel in the US, UK and Europe. In one of the most beautiful expressions of solidarity, dock workers in Italy and the UK refused to load arms and war material meant for Israel. Young Jews, in particular, are standing up to say that they oppose the Israeli state’s Zionist agenda. Whether this will lead to a long-term shift in international support to the US is something to watch out for.

For quite some time now, the Indian government’s foreign policy has been seeing a shift. India, which was one of Palestine’s staunch supporters, slowly started building diplomatic, military and economic ties with Israel – leading to a significant dilution in its condemnation of Israel’s genocidal war crimes. Under Narendra Modi, the Indian government took this process to the next level. As a result of the RSS-BJP’s growing influence, the popular discourse in India shifted against the Palestinian struggle. The Hindutva project found a kindred spirit in Israel’s Zionist, anti-Arab, anti-Muslim agenda.

As the current violence flared up in Palestine, the Modi government did not join the caucus of unconditional support for Israel. It issued a statement condemning some of the Israeli violence. However, the devil is in the details. The Indian government, shifting away from decades of its own policy, refused to state unequivocally that East Jerusalem is and should always be part of Palestine. Without East Jerusalem going to Palestine, a two-state solution to the Israel-Palestine conflict is virtually impossible. In other words, the Indian government’s support for Palestine was toothless because it did not state the specifics.

As the Modi government was equivocating on its support to Palestine, right-wing supporters were cheerfully trending hashtags on Twitter in support of Israel. Right-wing activists were proudly stating their willingness to fight alongside Israeli troops brutally evicting Palestinians from their homes. And the Indian government was arresting youth in Kashmir for holding protests in support of Palestine. Kashmiri artist Mudasir Gul was arrested for the 'crime' of producing graffiti with the words ‘We are Palestine’.

The battle for justice and freedom for Palestine is going to be a long and arduous one. It will require people across the globe to press against racist, fascist ideas and put pressure on their own governments. We, in India, have a historic responsibility to defend the Palestinian resistance, to stand against all forms of colonial and imperial agendas.