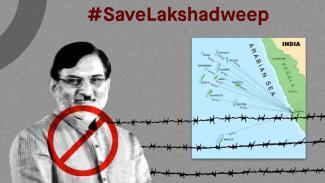 The recent events in the union territory of Lakshadweep are a matter of deep concern. All signs point towards a deeply disturbing plot that is unfolding on this archipelago in the Indian Ocean under the administration of Praful Patel, the former home minister of Gujarat, who took over after the former administrator Dineshwar Sharma passed away from lung disease.

Let us take a look at the actions of the administrator’s actions in Lakshadweep for context since his appointment in December 2020. The UT had largely kept at bay the deathly COVID outbreak that ravaged the world and Indian mainland for over a year, but registered a sharp rise in cases as the administrator eased restrictions allowing outsiders into the archipelago. Around 5000 COVID cases have been registered in the UT since, where not a single case had been reported earlier.

The government’s own NCRB data had demonstrated that not a single case of murder had been reported on the islands and is one of the lowest crime zones in India. The government has however stated its intention of imposing the ‘Goonda Act’, which allows for the imprisonment of citizens without trial. This clearly shows that the government plans to start violence in a place, which has largely been peaceful so far. Fake propaganda has been circulating since March 2020 that claimed that arms and drugs were being smuggled from Lakshadweep to Kerala and were intercepted by the Indian Navy. Fact-checking sites have however exposed that the images used were from an Al Jazeera report from the Pacific. Moreover the intercepted vessels were not bound for Kerala but rather en route from Pakistan to Sri Lanka. The interception also happened 90 nautical miles away from Lakshadweep coasts (territorial waters are usually considered limited at 12 nautical miles according to UNCLOS).

Among the authoritarian pieces of legislation being considered by the administration is the Draft Lakshadweep Development Authority Regulation 2021 (LDAR) — which gives the administrator powers to grab land, remove or relocate islanders from their property, for town planning or any developmental activity.

Another is the Prevention of Anti-Social Activities Act (PASA), introduced in January 2021, under which a person can be detained without any public disclosure for a period of up to one year. Yet another is the Draft Panchayat Notification, which disqualifies a person with more than two children from being a member, and curtails the powers of the Panchayat by vesting areas like education, healthcare, fisheries and animal husbandry, all in the central administrator alone.

Sserious assaults on the island’s dietary democracy include the Draft Lakshadweep Animal Preservation Regulation which is a draconian beef ban law, as well as the move to take non-vegetarian food of school lunches: in a place where seafood is a basic means of sustenance!

Recently nurses who had gone on strike on the island with a demand for minimum wages were arrested without even being heard. Those who had protested the NRC, NPR, and CAA have also been arrested. The administration has dismissed hundreds of contract and casual workers employed by government offices; terminated mid-day meal workers, physical education teachers; closed down 38 Anganwadis; stopped freight transit through Beypore port in Kerala to cut traditional ties with the state; demolished the temporary sheds built by fishermen to store their nets and equipments, with permission from the previous administration in a place where fishing is the main source of income; proposed the widening of roads in a manner in which many homes and buildings will have to be demolished, despite the fact that the low population of the islands mean that the necessity of transportation is quite low. Clearly the agenda is to snatch the democratic rights of the people of Lakshadweep and ensure that corporate plunder of the islands can continue unabated.

The decision to allow bar licenses on the islands have also been controversial. Once again it is noticeable that he had made no such demands on Gujarat, a dry state, while he was the home minister. It is also clear that the administration is hand-in-gloves with the sand mafia and sea-cucumber harvesters (an activity which is banned in India) as it has prevented locals from stopping such activity. Dairy farms in Lakshadweep have also been closed with the Gujarat based Amul products being promoted.

This is not the first time that Praful Patel has come under focus for suspected crimes. In February, Dadra and Nagar Haveli MP Mohan Delkar committed suicide, with his suicide note naming Patel among others as responsible for his death. Delkar’s son Abhinav, in a complaint to the police, had alleged that his father was being “harassed” by Patel to pay Rs 25 crore or face a false charge under the Prevention of Anti-Social Activities Act. Patel himself has been charged with abetment of suicide by the Adivasi leader with an FIR under SC/ST PoA Act. His appointment itself is suspect as the post of the administrator has traditionally been preserved for IAS or IPS officers.

While Praful Patel has claimed that ‘development’ is his ‘only’ agenda, it is clear that the ‘development’ he talks about is not a people-oriented sustainable development, but a Hindutva-corporate, profit oriented one. Given the island has a 96 percent population of Muslims and has never had any form of communal violence, which exposes the basic lie presented by Hindutva as Muslims being the ‘aggressors’. The RSS mouthpiece Organiser has claimed that ‘Islamists’ are instigating the locals against the administrator and an internet shutdown is looming over the UT. The people of the islands have clearly rejected the pro-corporate ‘reforms’ being introduced and trended #SaveLakshadweep on Twitter. Indians from all over the country must stand with Lakshadweep.