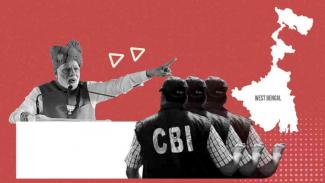 India’s dysfunctional democracy, renamed elected autocracy by the international media, works best at nights. Forty-six years ago the Emergency had been ushered in through a dreaded midnight knock on the constitutional doors of democracy. In our current dystopian reign of ‘achchhe din’, major announcements like demonetisation and lockdown are all made usually late in the evening. Two weeks after the stunning West Bengal verdict, the state is now experiencing a whole new set of nocturnal intrigues. On 17 May the CBI arrested four politicians – including the serving Mayor of Kolkata and the panchayati raj minister of Mamata 3.0 – in connection with a five-year-old corruption case. They got bail from a CBI court in the afternoon, but the High Court stayed the bail through an ex parte order around midnight, following which the four accused were taken to jail at the dead of night. The High Court stay on a reasoned bail order violated all procedural propriety and set up a shocking example of sending people unnecessarily to jail even as the Supreme Court has explicitly advised against it in these pandemic conditions.

Ever since the poll results announced an emphatic rejection of the BJP dream of conquering West Bengal, indications were clear that the BJP was in no mood to accept the verdict and let things settle down. Incidents of post-poll political violence were mischievously given a communal spin and massively exaggerated with forged reports and fake videos. The verdict was termed a ‘minority veto’ and a campaign was launched across the country and among the Indian diaspora against a so-called anti-Hindu terror and genocide in West Bengal.

Notorious for his extremely partisan role in West Bengal, Governor Jagdeep Dhankhar is working overtime to subvert the verdict and work as an independent centre of power over and above the elected government and beyond the parameters of constitutional propriety. Even as the incidents of post-poll violence ebbed and the state began to pay attention to the ominously escalating Covid19 graph, the Governor chose to visit Sitalkuchi and Nandigram. And while the MLAs and ministers were being sworn in, he authorised the CBI to proceed with the prosecution of the accused in the Narada case, as part of the script currently unfolding in West Bengal, without any consultation with the state government or reference to the Speaker.

We must remember that the Narada sting had actually been conducted in 2014, but the tapes were released just before the 2016 elections, and became a big talking point in those elections. In 2017 the case was handed over to the CBI by the Kolkata High Court. Several of the key accused have meanwhile shifted to the BJP, including Mukul Roy, currently an all-India Vice President of the BJP and MLA and Suvendu Adhikari, currently the leader of the BJP legislature party and the leader of opposition in West Bengal Assembly. Why is the CBI, which showed little urgency with its prosecution all this time, suddenly in a hurry when West Bengal has just emerged from a protracted eight-phased electoral exercise and is trying to combat a raging pandemic? And why this selecting targeting of only TMC leaders to the complete exclusion of the accused who have now taken refuge in the BJP? Incidentally, one of the four leaders now arrested, is Sovan Chattopadhyay, a former Mayor of Kolkata Corporation and TMC leader who had recently joined the BJP only to resign after being denied a ticket.

There is however more to the CBI intervention at this moment than merely regulating the traffic of turncoats – past, present, and potential. The unmistakable message is that any state refusing to accept the double engine bait of the BJP will have to remain ready to pay a heavy price for its defiance. Delhi has had to pay the price even though the Aam Aadmi Party has hardly played any major oppositional role, and has chosen to go with the BJP on all major political issues, from stripping J&K of its constitutional status to the BJP narrative on the Delhi riots and the string of vindictive post-riot arrests of anti-CAA activists. Indeed, several BJP leaders have blamed the people of West Bengal for committing a historic blunder by not voting the BJP to power.

It will be height of political naivety to see West Bengal developments as just another controversy over a few scam-accused politicians. The opposition to the politically motivated use of the CBI or the office of the Governor is not a defence of the scam-accused or advocacy of impunity for those implicated in corruption cases. The point is having failed to win the elections in West Bengal, the BJP is out to undermine the verdict by all means. The concerted intervention of the CBI and the Governor marks just a continuation by other means of the BJP’s failed bid to conquer West Bengal.

The BJP is especially aghast with the West Bengal verdict because it has energised the ongoing struggles against the betrayal and incompetence of the Modi government and strengthened the people’s yearning for a powerful national opposition and political alternative to the Modi government. Hence the desperate attempt to undermine and overturn the West Bengal verdict. Any imposition of President’s Rule in West Bengal will be an all-out war on the constitutional foundation and federal framework of Indian polity. It will be not just a distraction of popular attention away from the Modi government’s catastrophic failure in the face of the Covid second wave, but decimation of democracy in India. Opposition parties and people’s movements across India must therefore condemn the Modi government’s conspiratorial intervention in West Bengal and demand immediate recall of the partisan Governor.